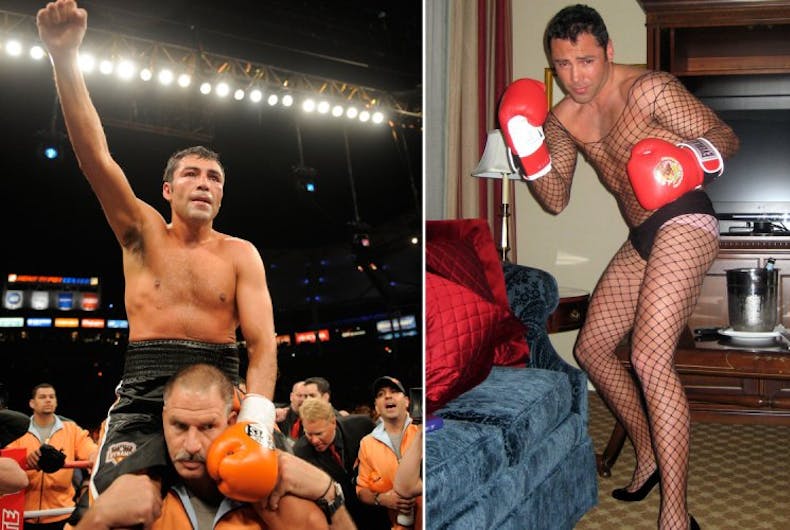 A decade after someone leaked photos of boxer Oscar De La Hoya dressed up in fishnet stockings the retired athlete turned boxing promoter has admitted that they’re actually him.

While multiple female models have claimed over the years that they’ve participated in drug and alcohol fueled crossdressing sex parties with De La Hoya, the boxer has always tried to deny it.

De La Hoya claimed the photos were faked when they came out and ended up paying Russian model Milana Dravnel, the woman in the photos with him, $20 million dollars to buy her silence. Shortly after the photos surfaced, another model, Angelica Marie Cecora, told the New York Post she had also had a sex and drag party with the athlete.

“It was beyond kinky. Things that I don’t even know how to explain were done with him,” she said at the time.

In a Spanish language interview with Univision, the boxer has finally admitted the truth, saying he was struggling with drug and alcohol addiction at the time. He was high when the photos were taken, he said.

“Let me tell you, yes, yes, it was me (in those pictures),” De La Hoya said in the interview. “I am tired now of lying, of lying to the public and of lying to myself.”

The retired boxer faced a similar question from Charlamagne Tha God on “The Breakfast Show” recently and kept his response short and simple. After noting the photos were taken over a decade ago and before three stints in rehab, he got to the heart of the matter.