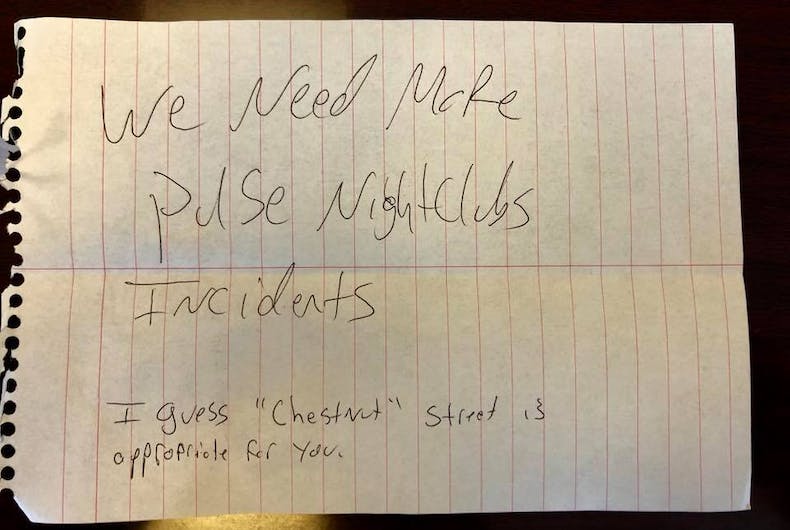 When you’re a well known out LGBTQ person, you can expect to get hate mail from “loving” Christians, racists, and bigots. It comes with the territory.

Out Pennsylvania legislator Brian Sims shared an example of the mail he receives on Facebook and it’s a doozy.

The letter is addressed “To the dick sucking faggot Brian Sims,” and it doesn’t get any better as it continues.

“My PRIDE in being a member of the lesbian, gay, bisexual, transgender, and queer communities is so much greater than any nastiness or aggression you’ll ever send my way because of it. This is a battle you can’t win,” Sims wrote in his post.

“My communities are stronger than you, more resilient than you, and have more reasons than ever before to FIGHT for our country!”

The letter ends on a particularly nasty note.

“We need more Pulse nightclub incidents,” the sender, who only identified himself as a former military sniper on the return address, scrawled on the back along with a juvenile taunt.

“I guess ‘Chestnut Street’ is appropriate for you.”

Sims’ office is on Chestnut Street.

‪DEAR BIGOTS: When my Office gets letters like this, I’m reminded of today’s Marriage Equality anniversary and of last…