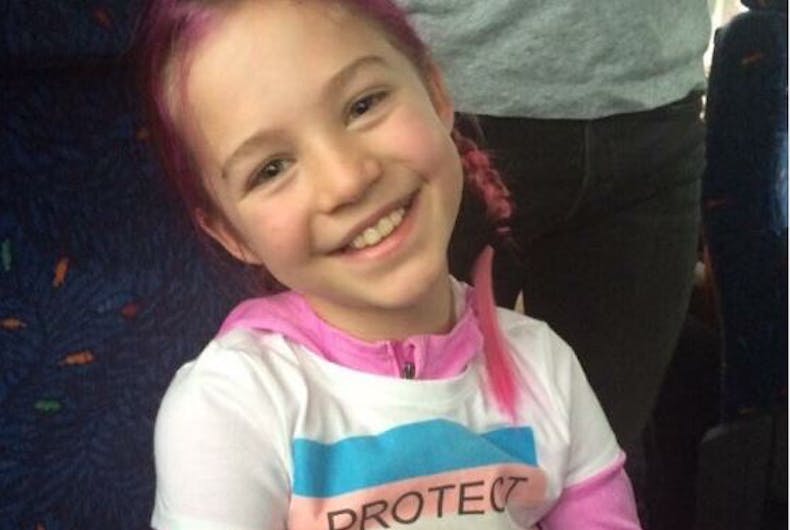 10 year old Rebekah had the best sign at a rally to protest Trump’s rollback of transgender rights. Her mother said that Rebekah has a lot of support from her community and school.Photo: Jamie Bruesehoff on Twitter

A pastor’s wife wants the world to know that she stands firmly behind her transgender child, whom she calls “a beloved child of God,” in a post for Medium.

The “lifelong Lutheran” has three children, and describes the oldest, Rebekah, who is a 10-year-old trans girl, as “an excellent student with a deep love of learning. She is adored by classmates and teachers. She’s just as happy mountain biking and swimming in waterfalls and as she is twirling in fancy dresses and performing on stage. She is strong and determined.”

We recently reported on Rebekah having the best sign at a rally for transgender rights.

But it wasn’t always such a perfect picture. In fact, Bruesehoff reports that their child went through a frighteningly dark period before she “transitioned to live as her true self.”

Related: Father & daughter both come out as transgender, will transition together

Bruesehoff says she and her husband sought out professional help for Rebekah, and they “all came to realize she wasn’t a boy. She was a girl. At eight years old, we changed her name and pronouns and she began living as herself in the world. She immediately transformed into a confident, joyful child whose smile lights up an entire room.”

“My husband is a Lutheran pastor in the Evangelical Lutheran Church in America,” she continues. “As a clergy family, we have lived out this journey publicly in our church and our community where Rebekah has been welcomed with open arms. We may not entirely understand the science around why people are born transgender or even what it all means for our daughter’s future, but we know that God created each and every one of us in God’s own image. God does not love our daughter in spite of her gender identity. God did not put her in the wrong body. This is who she has always been, who God created her to be, and like I’ve heard from so many who want to dispute transgender identities, God doesn’t make mistakes.”

Many children are not so lucky. As a recent report by a major UK Christian charity noted, churches often pass on discrimination and shame that leads to higher rates of depression and suicide for LGBTQ youth.

With the Trump administration backing away from supporting transgender student rights, it is more important than ever to have families support their trans children and for those kids to feel strong and protected enough to share their stories and help change hearts and minds.

Bruesehoff concludes that they stand in support of transgender student Gavin Grimm, whose case was recently knocked back down to a lower court by the Supreme Court. The case revolves around whether or not transgender individuals should be allowed to use the bathrooms matching their gender identity.

“This case may specifically be about a transgender child’s ability to use the proper restroom, but it really is so much more than that. This is about dignity and compassion for transgender people. This is about the right to be who you are in the world with the same rights and protections of any other individual,” she writes.

“My husband, Rev. Christopher Bruesehoff, was one of nearly 2,000 faith leaders to sign an amicus brief supporting Gavin Grimm and the rights of all transgender students, standing in solidarity with the trans community.”

The case, and the state of transgender rights in this country, remains an open question.

This year is already on track to once again break the record for the deadliest for transgender people. At least seven trans women have already been murdered so far in 2017.