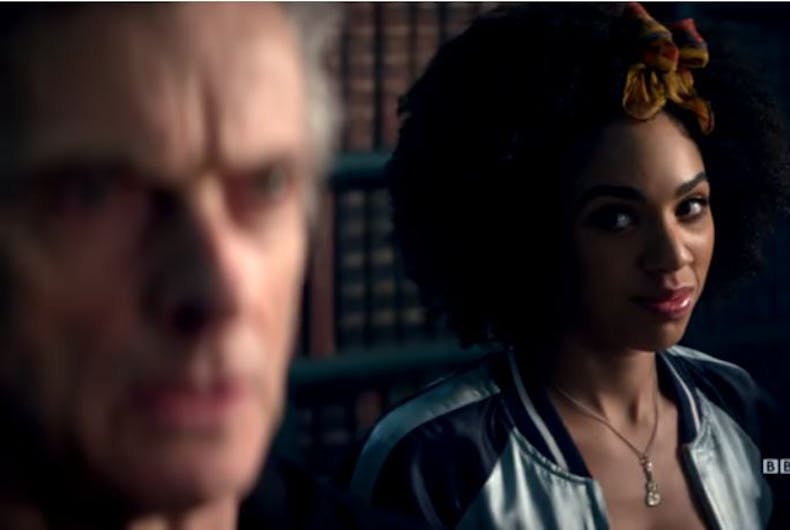 Pearl Mackie as Bill Pots in “Doctor Who.” Photo: BBC

Doctor Who premiered its tenth season last night, and with it debuted the first gay companion, character Bill Potts, played by Pearl Mackie.

When Mackie found out her character was a lesbian, she had the perfect response.

“I was like, ‘Yeah, okay, cool,’ Mackie recalled thinking about learning of Potts’ sexuality, she told Entertainment Weekly. “I mean, there’s so many elements to Bill, there’s so much to dive into as an actor, that her sexuality is quite far down the list of things that I’ve thought about. For me, I think representation is really important. You know, it’s 2017, so it’s about time for a gay main companion, really.”

Mackie is aware of the positive effect this type of representation can have on the younger generation, drawing on her own experiences.

“Growing up as a mixed-race girl who wanted to be an actress, I didn’t see many people like me on the telly. I just didn’t,” she told Vanity Fair. “For me, being able to be a recognizable face of an ethnic minority is great. That’s important for me, so I imagine that for the young gay, and the older gay community, that it is important to see someone in a mainstream show that is gay.”

As Entertainment Weekly notes, this isn’t the first time the show has featured a queer character. There was the omnisexual Captain Jack Harkness (John Barrowman) and The Doctor’s wife, the bisexual River Song (Alex Kingston), but neither were full-time companions.

This is Peter Capaldi’s last season playing The Doctor, and there are questions as to whether or not Mackie’s character will return.

““Um, well, you’ll just have to wait and see if Bill comes back!” she said.

There has been talk that openly gay actor Ben Wishaw could take the role as The Doctor. Wishaw and Mackie once worked together in a 2014 music video for the song “Real,” by Years & Years.

Could the pair reunite for the eleventh season of Doctor Who? Well, we’ll just have to wait and see.