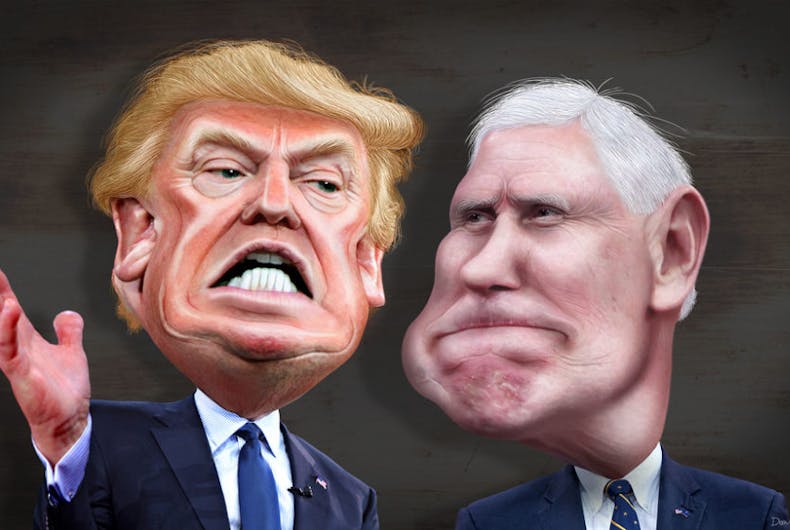 Many winners last night tied themselves to Donald Trump and Mike Pence.Photo: DonkeyHotey/Flickr

Is it not obvious by now who is controlling President Donald Trump and his anti-LGBT crusade?

Vice President Mike Pence, who made a national name for himself as governor of Indiana by pushing “religious-liberty” laws to allow citizens to ignore LGBT rights for religious reasons, if firmly in charge. That’s not to mention anti-trans legislation he supported, and his backing of conversion therapy — all of which Pence sees as his contribution to the moral fiber of America, and his legacy.

By sheer elimination, one can see how the program of ridding the government of any sign of LGBT rights is one of Pence’s aims. Pence and former presidential adviser Steve Bannon were influential in the naming of far-right Republicans whom Trump chose to lead his administration.

Trump, who was and is an outsider, knew almost none of those he nominated, while Pence had been a Washington insider from his days as a Congressman and had a network of connections to anti-LGBT organizations on which he could call.

It’s almost like a dog sniffing the behind of another dog it likes. OK, let’s put it out there: There is no other person so primed to kiss Trump’s ass at any given point than Pence. Hence, Trump tosses him his favorite treat — the rollback of LGBT and women’s rights, as Pence begs on all fours.

There is no better way to illustrate this than the ban of transgender people in the military, which saw a victory this week as it was struck down by a court.

Few understand how this started.

Senate and House members eager to overturn an Obama-era rule allowing trans people in the military tried to find a way to do so by using military budgeting measures; this caused disagreement in the White House, with squabbling between those who wanted the issue left alone and the Pence team.

Enter a disgruntled Trump in a weakened moment of attacks and who saw a need to change the dialogue, and presto: He’s able to toss a treat in the form of a tweet to ban trans people from the military.

Good boy, Mikey, now crawl into your cage and go to sleep with your treat.

While everyone in the West Wing tries to influence Trump to produce change in their direction, Pence is the only one who has a long list in the win column. In fact, he has won more policy issues in the White House than Trump himself has won with Congress. Here’s just a partial list of wins for Pence:

That is quite a record of victories in only 10 months. There is no other figure in the West Wing who has consistently had his or her agenda signed off on and moved. Pence is wagging Trump’s tail.

“Resist” is a holy word, but in doing so, you’re not just resisting Trump. Resisting only Trump is very dangerous. Many have shouted for a Trump impeachment. That would make Pence president.

A better plan is to block Trump at every level, or as best as possible for the next three years, then hopefully beat him in an election. The only other alternative is President Pence.

Remember, this is not simply an LGBT survival guide, it’s also about women’s health, immigration and a whole host of important issues. Pence is worse than Trump on all accounts.

Mark Segal, is the nation’s most-award-winning commentator in LGBT media. His recently published memoir, “And Then I Danced,” is available on Amazon, Barnes & Noble or at your favorite bookseller.

Cancel reply
Pence may be a lapdog, but he’s wagging Trump’s tail