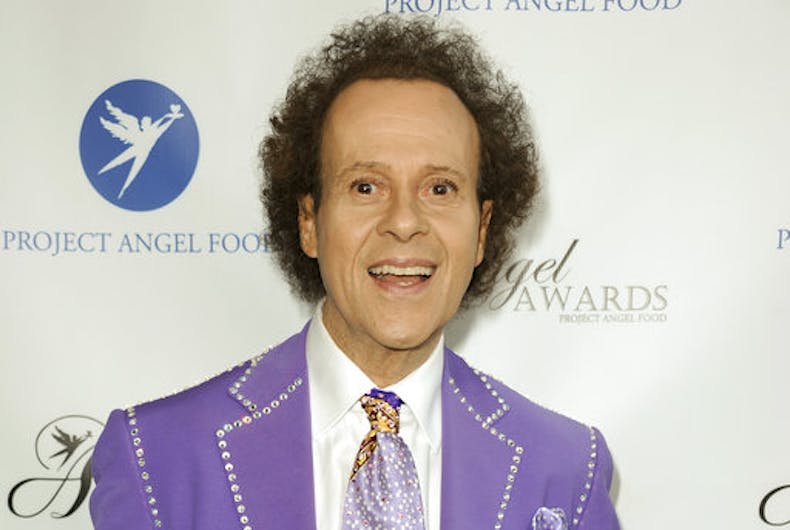 FILE – In this Aug. 10, 2013 file photo, fitness guru Richard Simmons arrives at the Project Angel Food’s 2013 Angel Awards in Los Angeles. Despite what seems to be a national obsession with the fitness guru’s wellbeing, his publicist, manager, brother and two officers from the LAPD have all said the 68-year-old is at home in the Hollywood Hills and doing fine.Photo: Photo by Richard Shotwell/Invision/AP, File

His publicist, manager, brother and two officers from the Los Angeles Police Department have all said the 68-year-old fitness guru is at his Hollywood Hills mansion and doing fine. Simmons said the same himself when he called into TV’s “Entertainment Tonight” last year, explaining he was safe and well and that “it’s time right now for Richard Simmons to take care of Richard Simmons.”

But he has been missing from the spotlight for three years — and that was enough for Dan Taberski, a former producer of “The Daily Show,” to create the “Missing Richard Simmons ” podcast. Taberski has spent six episodes investigating his subject’s whereabouts, making it most popular podcast in the country and inspiring a national obsession with Simmons’ well-being. The final episode was released this week.

So how can a public figure step away from the spotlight in this plugged-in, celebrity-obsessed culture, where everyone has a camera in his pocket and a potential podcast in the making? And what are the ethical implications of publicly searching for someone who says he or she needs some private time?

Billed as an act of love by Taberski, “Missing Richard Simmons” has been “harmful,” said Michael Catalano, Simmons’ manager and friend for 30 years. It resurrected old rumors — that Simmons is changing his gender or being held hostage by his housekeeper — and heaped unwanted attention on his respite.

“He didn’t need this intrusion to validate his contribution to people,” Catalano said in an interview Tuesday. “He knows the reception (the podcast) is having. He knows how people are responding to it. But it’s also hurtful. It’s humiliating, you know? It’s damaging. It just is …

“Anywhere he goes now there’s going to be — more than there was before — pointing and speculation. Has he transitioned into a woman? Is that him behind that beard? I don’t envy that. I don’t envy that for someone, who at this time, has chosen to retreat. He has the right! I just don’t think because you are on the public stage for 40 years that you have to continue to remain there until your last breath.”

Simmons did not participate in the podcast and hasn’t given any interviews since speaking to “Entertainment Tonight” in March 2016. Once ubiquitous on talk shows, celebrity-home tours and at his own Beverly Hills workout studio, he hasn’t been seen publicly since February 2014. He also stopped corresponding with former students and friends.

Taberski, who declined to be interviewed for this story, considered himself one of those friends. After getting to know the fitness guru by taking classes at the now-shuttered Slimmons, Taberski pitched him on making a documentary about his life. Simmons considered it but ultimately passed, Catalano said.

About six months later, Catalano learned that Taberski was contacting some of Simmons’ friends and requesting interviews for a podcast.

“Missing Richard Simmons” clearly reflects Taberski’s admiration for his subject’s business acumen and personal generosity. Simmons may have inspired millions with his “Sweatin’ to the Oldies” exercise videos, but he also personally called dozens of overweight and isolated people each day to encourage them toward better health and self-esteem. Taberski features several of them on the podcast, along with many of the regular students at Slimmons, all of whom considered Simmons a personal friend.

Simmons’ warm persona and previous accessibility, combined with the expected omnipresence of today’s celebrities and an ever-growing array of broadcast outlets, has made his voluntary withdrawal from public life seem like an intractable Hollywood mystery.

“People don’t understand, or it is certainly anomalous, that someone would actually not want to be famous or seek anonymity after having great fame,” said JD Heyman, deputy editor of People magazine, which featured Simmons on last week’s cover. “That’s an old Hollywood story. That’s as old as Greta Garbo.”

But where Garbo consistently eschewed fame’s trappings before retiring at 36, Simmons courted the spotlight until his abrupt and wordless departure from it in 2014.

Simmons has been quiet since posting a heartfelt goodbye on his website and Facebook page in November when Slimmons closed.

Johnny Carson managed to maintain a low profile and general public invisibility after his retirement in 1992, though some speculated that his health was failing. Gene Hackman quietly retired from acting more than a decade ago and switched to writing novels, yet no one made a fuss about it.

But in this Instagram world, the public expects daily — sometimes hourly — updates from their favorite celebs. When Kim Kardashian retreated from the public eye after her Paris robbery, there was a media vigil for her next post, which came weeks later.

After three years of reclusion, the clamor around Simmons has never been louder. The popularity of the podcast has spawned a flood of mostly positive letters and emails, Catalano said. “You get the one-tenth of one percent that says he owes his public.”

“I understand why people are confounded,” Catalano said. “I’m personally conflicted about it because I know the incredible reception he would get if he wanted to re-emerge in some way, and yet I understand that he may not want to. I get both sides of it.”

Stars should be free to set some boundaries of privacy and accessibility, Catalano said. A journalist’s responsibility is to “tell the story as sensitively and with as much as deference to that public figure as you can,” said Heyman, recalling Harry Benson’s famous 1976 photo of the reclusive Garbo in a swimming cap.

Though Catalano doesn’t say so directly, it sounds like he expects Simmons to return at some point.

“When Frank Sinatra sang ‘My Way,’ that was his goodbye song. And Frank got bored and he was back for 20 years,” Catalano said.

He said he was talking with Simmons on Tuesday afternoon about “what he feels; what he wants to do or say, if anything, at this time. It may be nothing right now. We shall see.”

Cancel reply
Podcast inspires national obsession with Richard Simmons, but at what cost?