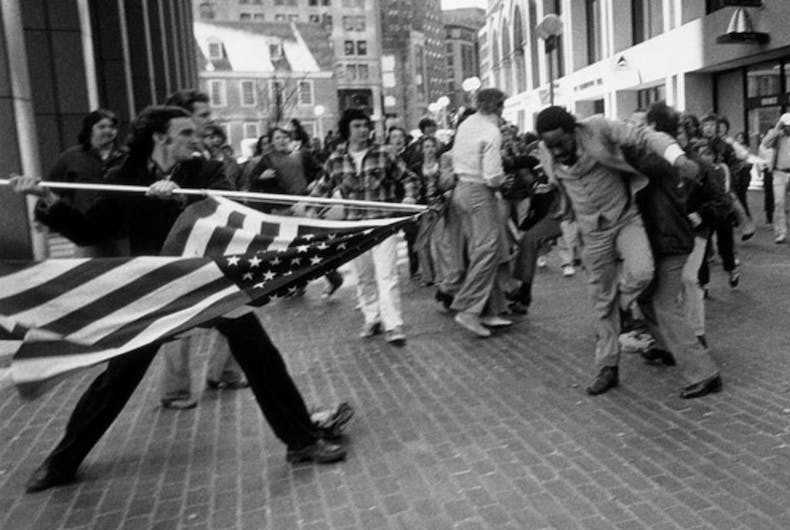 “Nationalism is an infantile disease. It is the measles of mankind.” Albert Einstein

Former San Francisco 49ers’ quarterback, Colin Kaepernick, joined by a growing chorus of other athletes, choose to speak up and stand up to systemic racism by remaining down on one knee during the presentation of the Star-Spangled Banner, the U.S. national anthem, at professional football games and other sporting events.

He emphasized that he is not anti-American and that he loves his country, and, “I love people. That’s why I’m doing this. I want to help make America better.”

Kaepernick continued his protests during the regular season and donated $1 million “to different organizations to help these communities and help these people.”

Though Kaepernick and the movement within the sports world has garnered increasing support, an intense backlash, including President Trump, has developed among those who accuse Kaepernick of disrespecting the flag and the country it represents. They also accuse him of misusing his celebrity.

Francis Scott Key, a 35-year-old lawyer and amateur poet, wrote his “Defense of Fort McHenry,” the lyrics to what would become the “Star-Spangled Banner,” after beholding British ships of the Royal Navy striking Fort McHenry in Baltimore Harbor during the War of 1812. The large American flag, the Star-Spangled Banner, raised exultantly above the fort during the U.S. victory gave Key his inspiration.

Ironically, the poem was set to the tune of “To Anacreon in Heaven,” a popular British drinking and womanizing song written by John Stafford Smith for the Anacreontic Society. The practice of playing “The Star-Spangled Banner” at sporting events began during the 1918 U.S. baseball World Series during World War I at the first game between the Chicago Cubs and the Boston Red Sox.

As the crowd of 10,274 spectators — the smallest that has witnessed the diamond classic in many years — stood up to take their afternoon yawn [7th inning stretch]…the band broke forth to the strains of ‘The Star-Spangled Banner.’ The yawn was checked and heads were bared as the ball players turned quickly about and faced the music….First the song was taken up by a few, then others joined, and when the final notes came, a great volume of melody rolled across the field. It was at the very end that the onlookers exploded into thunderous applause and rent the air with a cheer that marked the highest point of the day’s enthusiasm.”

The idea quickly caught on and spread, even though the “Star-Spangled Banner” was not officially proclaimed, through a congressional resolution, as the U.S. National Anthem until March 4, 1931.

Today, the song’s first two verses kick off numerous events in addition to sports. Usually omitted, though, is the third verse, which some interpret as racist.