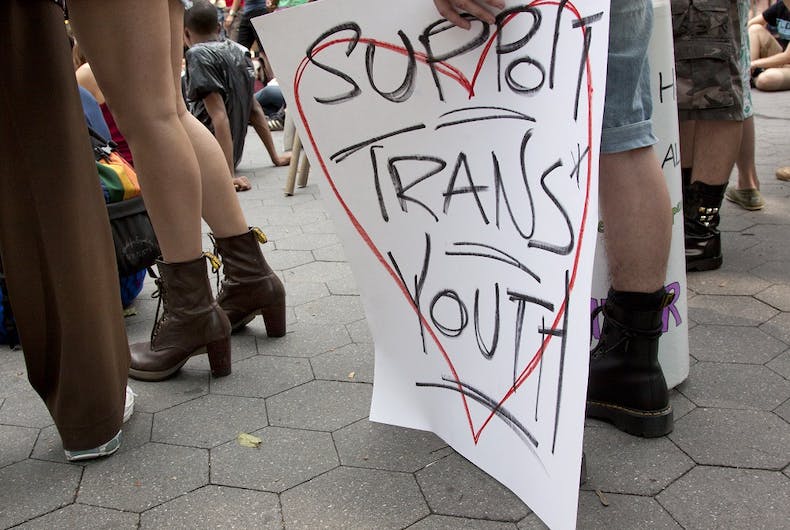 : A supporter holds a sign that says “Support Trans Youth” in Washington Square Park on the 8th Annual Trans Day of Action on June 22, 2012 in New York City.Photo: Shutterstock

As Republicans in at least ten states move to ban any gender confirmation-related medical care for transgender youth, a new study shows that access to puberty blockers can reduce suicidal ideation.

In the last two months, conservative lawmakers across the country have introduced bills that force transgender youth to wait until they’re either 16 or 18 to access medical care. They say the bills are about protecting trans youth from themselves.

Related: Calling transgender youth by their name dramatically reduces their chance of suicide

“Think about what you knew when you were that age,” said South Dakota Rep. Fred Deutsch (R), who is co-sponsoring a bill to prevent trans youth from accessing health care, adding that lawmakers “need to be the adult in the room,” because medical professionals and parents cannot be trusted to fill that role.

But a team of researchers from Boston just published a study in Pediatrics that says otherwise.

About 90% of the people who wanted puberty blockers but didn’t get them reported suicidal thoughts.

The study controlled for parental support – which could be linked to trans people getting puberty blockers when they’re young and improved mental health – and the effect was still there.

“The research is particularly important now, as several states have introduced legislation that would make pubertal suppression for transgender adolescents illegal,” said Jack Turban of Massachusetts General Hospital and the lead author of the study. “Some of these bills threaten physicians who offer this medical care with jail time.”

Indeed, some of the Republican bills would make it a felony to provide gender affirmation care for minors.

Late last year, the case of Luna Younger – a seven-year-old transgender girl – caught the attention of conservative media. The girl’s mother, as well as medical professionals who worked with her, say that Luna is transgender, but her father says that his daughter is actually a boy and that her mother is forcing a transition on her.

Conservative media outlets presented the story as a father’s attempt to save his seven-year-old child from hormones and surgery, which were unlikely treatments for a child her age. In reality, she wanted to socially transition.

While very few transgender minors get any form of surgery, puberty blockers are only useful when a transgender person is young. Waiting until several years after puberty to begin any medical treatment results in irreversible and unwanted changes to a trans person’s body that can make gender dysphoria – the distress a person feels when their gender identity doesn’t match their sex assigned at birth – much worse.

“We’re taking away the choices of parents and individuals,” said transgender activist Sue Robbins about one such bill in Utah. “Transgender healthcare is an affirming action that puts our youth in a better place.”