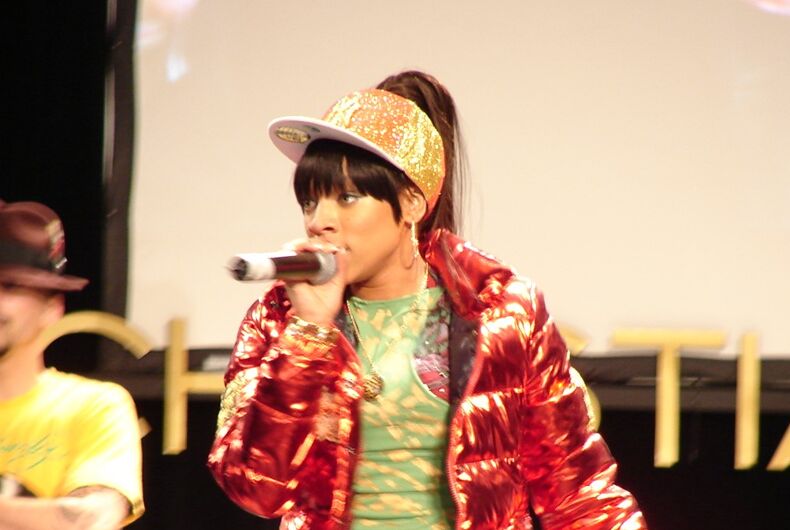 Rapper and reality TV personality Lil Mama claims that she wants to “start a heterosexual rights movement” so that straight people can express hatred against LGBTQ people more freely.

The musician behind the hit “Lip Gloss” and former judge on MTV’s America’s Best Dance Crew went on a transphobic tirade on Instagram.

Related: Lil Nas X had the best clapbacks to all the homophobic hate he’s gotten since coming out

After facing backlash on social media for her anti-trans rhetoric, she was back with an Instagram story saying, “I’m about to start a heterosexual rights movement.”

“Y’all fight so hard to be respected and SOME of you NOT ALL get a kick out [of] bullying people for having an [opinion],” she wrote. “There are so many people afraid to give their honest [opinion] because if they do the LGBTQ+ will hear what they want to hear and take statements out of context.”

And like so many people who have faced criticism in the past for anti-LGBTQ comments, Lil Mama claimed she has “loved ones of the LGBTQ+ community,” which proved that she is “not trying to hurt anyone, I’m just speaking my truth, just like you all.”

People also brought up a clip from Lil Mama’s time as a judge on America’s Best Dance Crew when Leiomy Maldonado, who is transgender, appeared on the show in 2009. Her criticism of Maldonado included an insensitive speech about how the dancer’s “truth” is “you were born a man” and then admonished her to “act like a lady” and even called her “transgendered,” as if her identity was somehow at fault for her dance performance.

I remember being dragged for calling Lil Mama transphobic when she posted a transphobic joke, but I guess people forgot she did this to Leiomy too ? pic.twitter.com/udGbTIo1CU

Lil Mama has also appeared on the reality show Growing Up Hip Hop: Atlanta and played Left Eye Lopes on the VHS film CrazySexyCool: The TLC Story. She has been nominated for several BET Awards and MTV Video Music Awards and has won two Teen Choice Awards.