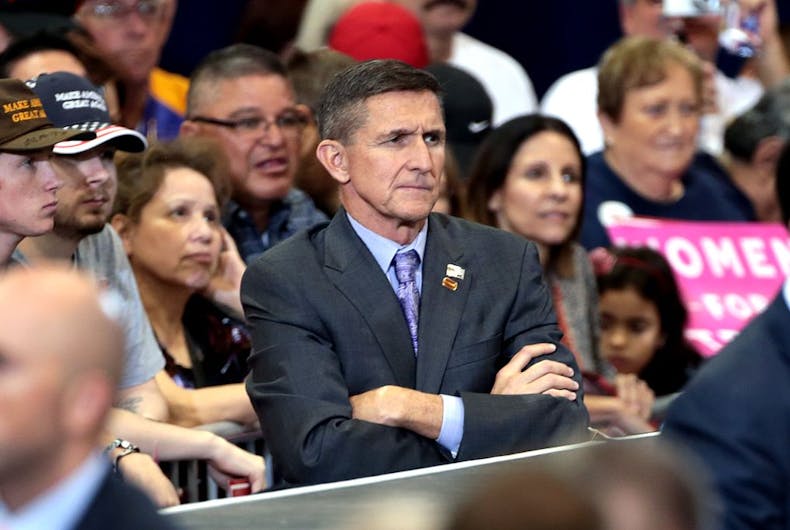 A week ago, a lot of folks thought that the idea that the Trump campaign colluded with the Russian government was pretty crazy. But with President Trump’s firing of FBI Director James Comey, that idea seems a lot more likely. After all, Trump himself admitted in an interview that the Russian investigation was at the top of his mind when he decided Comey had to go.

So now we’re faced with the real possibility that a hostile foreign power not only influenced the U.S. election by hacking it, but collaborated with the campaign of its candidate of choice to do so. To say we’re in uncharted waters is an understatement. But if there’s any satisfaction at all in the current crisis, it’s in seeing the shoe on the other foot for a change (and this time, with good reason).

Remember when being gay was considered the worst type of security risk? While the arguments about “Don’t Ask, Don’t Tell” hewed to the red herring of “unit cohesion,” the underlying theme was that gay service members were a security risk, an argument made by the GOP for decades to prevent LGBTQ people from serving their country.

The closet supposedly made them vulnerable to blackmail by foreign powers. Fearful of having their secret exposed, gay servicemembers would supposedly be willing to betray their country rather than have the truth come out.

That argument dates back to the 1950s. It was explicitly used during the Lavender Scare witch hunts of the McCarthy era to dismiss thousands of gay and lesbian government employees. During that time, supporters of the purge insisted on the connection between homosexuality and communism (aka, Russia). Senator McCarthy insisted that communists and gay men were dual “threats to the American way of life,” while another senator claimed that “you can’t hardly separate homosexuals from subversives.”  (Of course, McCarthy’s right hand man was Roy Cohn, a closeted gay man who went on to mentor Donald Trump in scuzziness.)

The military took this argument to heart with a vengeance. Over the decades, as many as 100,000 people were thrown out of the military only for being gay.

Ironically, one of the first cracks in the argument came from then-Secretary of Defense Dick Cheney in 1991. Cheney described the ban on gays in the military as a policy he inherited and said that the security risk argument behind it was “a bit of an old chestnut.”  That didn’t stop the military from purging gay and lesbian service members, even after they were ostensibly protected by “Don’t Ask, Don’t Tell.”

In fact, the Pentagon was happy to put homophobia above the nation’s security interests. In one notorious example, the military discharged 26 linguists fluent in Arabic and Farsi in the middle of the wars in Afghanistan and Iraq even though people with that knowledge were in precious short supply.

So imagine the thudding irony of a military general who, by every appearance, actually was a security risk. Michael Flynn lied about talking to the Russian ambassador about sanctions against Russia for its interference in the 2016 election. In her testimony before Congress last week, former Deputy Attorney General Sally Yates said she warned the Trump White House that its National Security Adviser was way too cozy with Russian leaders. “To state the obvious: You don’t want your national security adviser compromised with the Russians,” she deadpanned.

Funny how the same people who tried to prevent us from serving our country now look a lot like the potential traitors we were accused of being. With the Comey firing, the question now is whether anyone else in the Trump circle, including the president himself, represents a security risk as well. The inquiry into the matter promises to be messy and prolonged.

But if nothing else it is a lesson in what being a real security risk looks like. And it doesn’t look at all like being gay.

Cancel reply
Remember when being gay was considered the worst type of security risk?