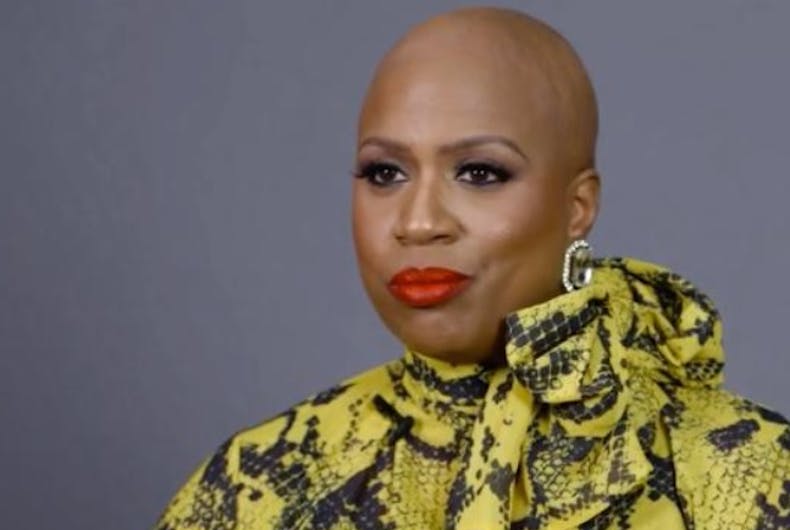 Rep. Ayanna Pressley (D-MA) said she has the autoimmune disorder alopecia areata, which has rendered her hairless.

Related: A Texas school has banned a young boy until he cuts his long hair

Our children across America are being humiliated and punished because of racist rules and policies that discriminate against their hair texture and natural hairstyles.

Last year the video of an African American high school wrestler forced to cut off his dreadlocks to compete went viral. The referee, who was white, said, “His hair and headgear did not comply with rules, and that if he wanted to compete, he would have to immediately cut his dreadlocks – or forfeit.”

Pressley, known for her signature Senegalese twists – as her personal identity and political brand – has been criticized as being “too ethnic” and “too urban.” However, to young black girls, Pressley’s hairstyle was both an inspiration and an affirmation to rock proudly.

African American women and girls endure some of the harshest punishments concerning our hair, thereby permitting racist workplaces, institutions, and educators to discriminate against us without repercussion.

In 2017, Mystic Valley Regional Charter School, in Malden, banned black twins Deanna and Maya Cook from playing after school sports and from attending their prom because they wore hair extensions to school, violating school policy. Massachusetts Attorney General Maura Healey stepped in on the twins’ behalf. Healey sent a letter to the school flatly stating that its policy “includes a number of prohibitions that are either unreasonably subjective or appear to effectively single out students of color.”

In the blockbuster hit Black Panther, the beauty of black unstraightened natural hair was placed front and center. Lupita Nyong’o as Nakia wore Bantu knots. Letitia Wright as Shuri donned individual braids and Danai Gurira flaunted a bald head. While many African American women today wear their hair in afros, cornrows, locks, braids, Senegalese twists, wraps, or bald, our hair – both symbolically and literally – continues to be a battlefield in this country’s politics of hair and beauty aesthetics.

Many sisters today might use a hot comb on their hair, which were around in the 1880s and sold in Sears and Bloomingdale’s catalogs to a predominantly white female clientele. Madam C.J. Walker, the first African American millionaire for her inventions of black hair products, didn’t invent the hot comb; she popularized its use by remedying the perceived “curse” of nappy hair with her hair-straightening products that continue to this day bring comfort to many black women.

Black hairstyles are not criticized when they are being appropriated by white culture, especially when white celebs or models wear our coiffed styles. In 1979 actress Bo Derek donned cornrows in her breakthrough film 10. In 1980 People magazine credited Derek for making the style a “cross-cultural craze.”

In 2018 when Kim Kardashian posted a video of herself flaunting braids to Snapchat, she credited them as wearing “Bo Derek braids.”

Renowned African American feminist author Alice Walker spoke about the constraints of hair and beauty ideals in African American culture. In her address “Oppressed hair puts a ceiling on the brain,” Walker, at the women’s historically black college Spelman in Atlanta in April 1987, stated the following:

I am going to talk to you about hair. Don’t give a thought to the state of yours at the moment. This is not an appraisal… it occurred to me that in my physical self, there remained one last barrier to my spiritual liberation: my hair. I realized I have never been given the opportunity to appreciate my hair for its true self. Eventually, I knew precisely what hair wanted: it wanted to grow, to be itself… to be left alone by anyone, including me, who did not love it as it was.

In California, the CROWN ACT (“Create a Respectful and Open World for Natural Hair”), a law prohibiting discrimination based on hairstyle and hair texture, went into effect on January 1. Femininity and attractiveness are integrally linked to hair as a Eurocentric aesthetic.

Pressley, however, disrupts this notion because she’s stunningly gorgeous and regal – with or without hair.

“I’m not here just to occupy space,” Pressley stated in a video interview with The Root. “I’m here to create it.”

Cancel reply
Rep. Ayanna Pressley reveals she has no hair in a culture obsessed with black women’s hair