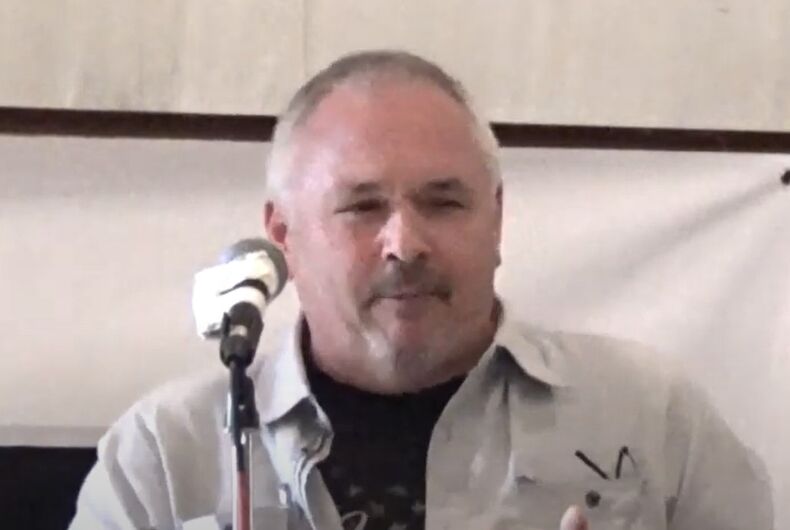 A Republican elected official in New York is facing calls to resign after he was caught on video saying that gay relationships are bad because “Give them an island, they’ll be gone after 40 years.”

Albany County Legislator George E. Langdon IV (R) issued a bizarre apology claiming that he has “never been homophobic nor do I think any individuals should be placed on an island” after he made homophobic comments at a meeting for a local conservative group. Even Republicans are distancing themselves from his statements.

Related: A gay man lost an ear in a brutal beating that almost left him dead

“This whole gender issue. OK,” Langdon can be heard saying in the video shared on social media that’s from a meeting held this week. “Everything God does is sustainable. It’s sustainable. It goes on and on and on. It’s perpetual. Sorry.”

“When you have homosexual relationships, it’s not perpetual. Give them an island, they’ll be gone after 40 years, OK? Because they can’t — God created us to be this way,” he said. “There’s so much common sense that needs to be applied to our policies, our procedures, the things that we do in our government.”

“I sincerely apologize to the LGBTQ community and all others for the hurtful remarks recently made at a conference,” he said in a statement after the comments were shared on social media. “I have never been homophobic nor do I think any individuals should be placed on an island. I deeply regret my foolish off-the-cuff comment that has caused so much pain.”

“I commit to doing a better job of respecting diversity. I hope my years of past public service demonstrate genuine concern for all individuals. I will be taking time to reflect on how to best serve moving forward.”

While Langdon apologized by saying he does not “think any individuals should be placed on an island,” that’s not what his argument meant. What he was saying is that sexual relationships that result in children are superior to those that do not. The argument implies that being gay is a choice that should be discouraged instead of a natural part of human diversity.

Moreover, it’s dehumanizing, imagining that gay people should be forced to live somewhere apart from everyone else and that they couldn’t figure out how to procreate like they are currently doing. All in service of arguing why Christians should be biased against LGBTQ people and why the government shouldn’t protect LGBTQ people’s rights.

Legislature Chairman Andrew Joyce (D) said Langdon can “no longer represent the people in his district.”

“Listening to someone laughingly share an ugly, nightmarish scenario of our loved ones being ‘gone after 40 years’ shakes us all to our core, not only as public servants, but as human beings,” Joyce wrote in a statement. “Albany County Legislator George Langdon is unfit to serve. I call on him to apologize and resign. Not for 40 years, but forever.”

Republican Minority Leader Frank Mauriello didn’t call on Langdon to resign, but he issued a statement that said, “Whatever your sexual orientation, we are all equal in God’s eyes and equal under the law.”

“Any statements that contradict that belief are unacceptable. Our community is strengthened by mutual respect and understanding and a shared belief that divisive comments will never move us forward.”

While the legislature can’t force him out of office, Democratic Majority Leader Dennis Feeney drafted a censure resolution. There are 30 Democrats and nine Republicans in the Albany County Legislature. They are expected to vote on it at their next meeting on April 12.