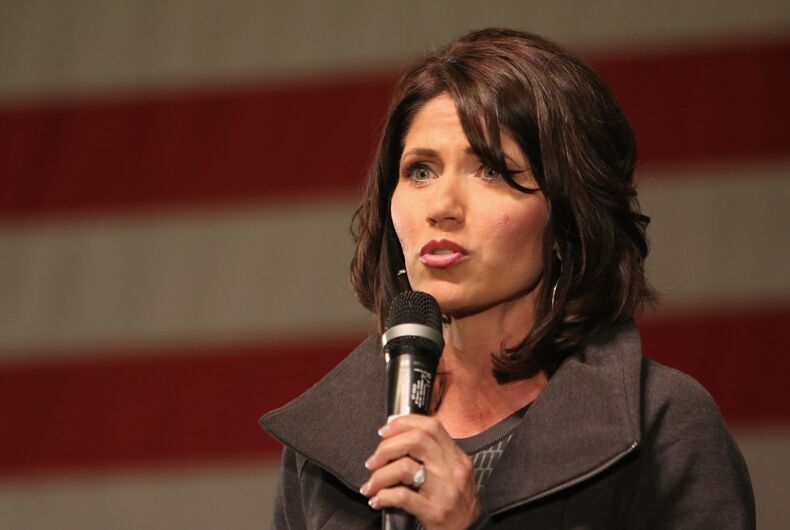 Republican South Dakota Gov. Kristi Noem is discovering that evangelical Christians invented cancel culture as the religious right and conservative pundits savage her for refusing to sign a piece of anti-transgender legislation.

Noem’s spokesperson is now decrying what he calls “conservative cancel culture” instead of blaming liberals for wanting the inept governor out of office. Noem’s handling of the coronavirus pandemic has earned her praise from COVID deniers and condemnation from medical professionals.

“Governor Noem is very used to fighting off criticism from the left,” Noem spokesman Ian Fury told the Daily Caller. “After all, in the past year, she was the only governor in the entire nation to never order a single business or church in her state to close. The left bullied her incessantly, but she didn’t cave.”

“But if any number of conservative pundits are to be believed, that same governor who refused to cave is now caving to the NCAA and Amazon on the issue of fairness in women’s sports. What? Apparently, uninformed cancel culture is fine when the right is eating their own.”

Noem said she was “excited” to sign the bill and only opposed the legislation because she thought it shouldn’t ban trans women from college sports. She worried such a ban would cause big-money collegiate sporting organizations, like the National Collegiate Athletic Association (NCAA), to avoid holding games and tournaments in the state, The Argus Leader reported.

Instead of vetoing the bill, she used a “style and form changes” maneuver that allowed her to return the bill to the legislature with notes of her desired changes. If the legislature complies, she’ll sign the revised law.

Fury called the bill “a trial lawyer’s dream, offering all sorts of avenues for litigation that have nothing whatsoever to do with the issue at hand.”

“Furthermore, the bill picked a fight with the NCAA,” he said, “a fight that renowned conservative legal experts advise Governor Noem that she will lose, especially considering South Dakota’s unfriendly federal bench.”

The legislation would require student-athletes to submit statements verifying both the sex they were assigned at birth and a non-use of steroids over the last year. Similar bills banning trans people from academic sports have been introduced in 14 states, the Human Rights Campaign said.

Tucker Carlson and South Dakota Governor Kristi Noem debate her decision to send a bill to ban biological men from playing girls sports back to the state legislature:

TUCKER: “You caved to the NCAA.”

GOV. NOEM: “Im not interested in picking a fight [in court] that we can’t win” pic.twitter.com/rgWAUIUcCh

RIP: Kristi Noem’s ambition to be President of the United States.

If you can’t stand up to the NCAA, you’re too weak to be POTUS.

What happened with Kristi Noem is a great example of why you NEVER fall in love with a potential presidential candidate too early. In politics, there are a million ways you can take your candidacy out back and shoot it in the back of the head. As she just did. https://t.co/dlUcADP36n

The Chamber of Commerce and big business is pushing against conservatives nationwide on critical race theory and transgender sports.

Kristi Noem is a swamp creature who caved to special interests over conservative voters.

Kristi Noem is exactly the kind of Republican we DON’T want: tough in press releases but an absolute coward when the opportunity to wield power, to the benefit of her voters and to the detriment of un-American entertainment companies, presents itself on a silver platter. Bye bye!

What a huge mistake ~ I’m talked to several cons who have written her off.

You can’t betray the base. Period.