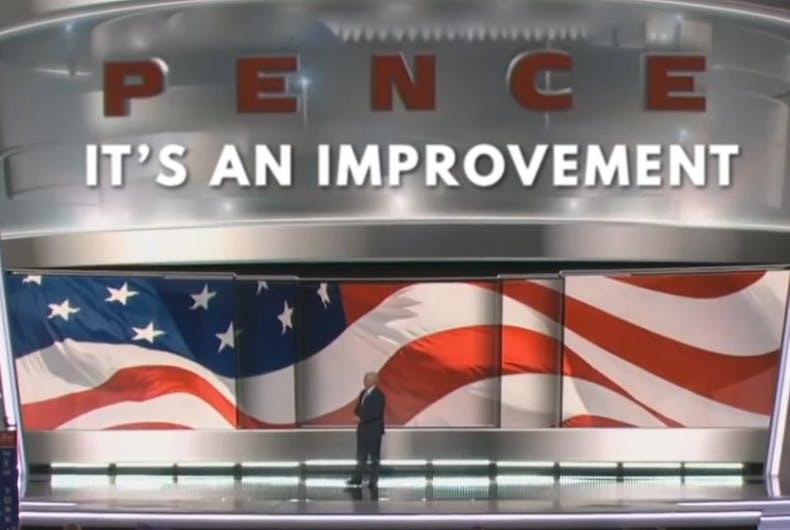 The ad has several tongue-in-cheek slogans for Pence, but the group behind it is serious about getting him the presidency.Photo: Defending Democracy

A new ad from the Republican group Defending Democracy is telling GOP Senators to vote to remove Donald Trump from office… so that Mike Pence can be president.

The group’s website – which features campaign slogans like “Pence: Well, I guess he’ll do” and “Pence: It could be worse” – says that Pence is a “bland, boring, completely typical, ordinary conservative Republican from Indiana.”

Related: Most of Trump’s impeachment lawyers have strong résumés (of anti-LGBTQ advocacy)

“And if the Senate does its duty, they’ll make him the next president of the United States.”

The group’s argument, besides their lukewarm love for Pence, is that Republicans don’t need to keep Trump in office to achieve their policy goals.

“If Donald Trump is removed from office Mike Pence — not Nancy Pelosi or Hillary Clinton — becomes the president,” the website says. “And, you know, we could do worse.”

While the argument makes sense on its own – Pence and Trump are ideologically similar, but Pence lacks Trump’s baggage and style – it’s unlikely to be effective in getting Trump removed from office.

Republicans have rallied behind Trump and party leadership has impressed on Republican senators that they are not to vote to remove Trump: “Vote against the president and your head will be on a pike,” GOP senators were told, according to an anonymous source who spoke with CBS News.

CBS News reports that GOP Senators have been warned by Trump team: “Vote against the president, and your head will be on a pike.” How is this acceptable? pic.twitter.com/19TKOn4kSq