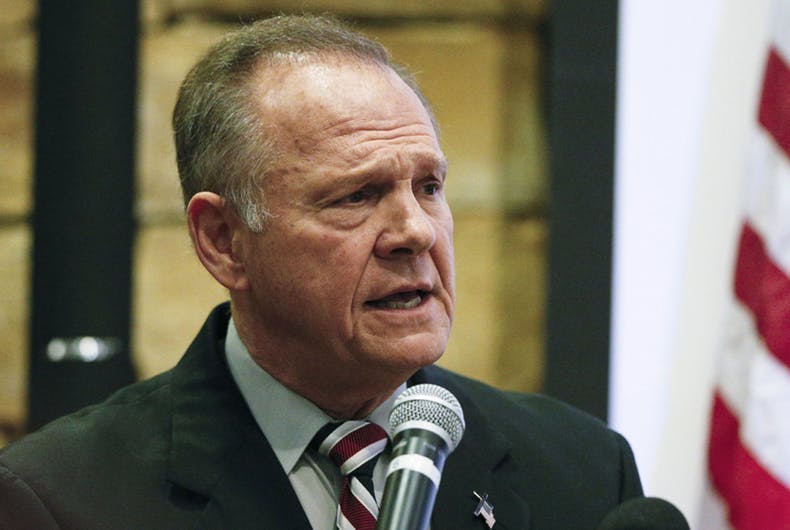 Accused child molester and former Republican Senate candidate Roy Moore has announced he will run again in the next election. Moore, a former Chief Justice for the Alabama State Supreme Court, was removed from office twice and lost the election to Senator Doug Jones, the first Democrat elected to the Senate from the state in decades.

The GOP sees a second Moore run as a move that would endanger their chances of defeating Democrat Doug Jones.

The Republicans, who control the senate by a 53-47 majority, consider the defeat of Jones a high priority. Taking back Alabama is key to the GOP retaining control of the senate in 2020 when several of their seats are at state, and growing frustration with the current senate could threaten their majority status.

Best known for his decades of extreme homophobia, Moore even refused to concede by claiming sodomy, abortion, and transgender people held him back.

While President Trump endorsed Moore in his last bid for the Senate, Trump was clear that Moore had fallen out of favor.

“Republicans cannot allow themselves to again lose the Senate seat in the Great State of Alabama. This time it will be for Six Years, not just Two. I have NOTHING against Roy Moore, and unlike many other Republican leaders, wanted him to win. But he didn’t, and probably won’t,” Trump tweeted in late May.

“If Alabama does not elect a Republican to the Senate in 2020, many of the incredible gains that we have made during my Presidency may be lost, including our Pro-Life victories. Roy Moore cannot win, and the consequences will be devastating….Judges and Supreme Court Justices!”

The GOP leadership has also made it known that they don’t want Moore in the race, handing him an opportunity to paint himself as an outsider battling against the establishment.

“The people of Alabama rejected Roy Moore not too long ago,” Indiana Senator Todd Young told the Associated Press when Moore confirmed he was mulling a rematch. “I with my Republican colleagues always want to be supportive of the most conservative candidate who can actually win a race, and I don’t see that anything has changed in the state of Alabama since the last election.”

Young, who leads the National Republican Senatorial Committee and is tasked with electing more Republicans to the chamber, added, “We’ll actively work to make sure that the most conservative, electable Republican is our nominee.”

“I can assure everyone that by running, Roy Moore is going against my father and he’s doing a disservice to all conservatives,” Donald Trump Jr. tweeted after Moore suggested he wasn’t going against President Trump’s wishes by running again.

“There will be a lot of efforts made to ensure that we have a nominee other than him and one who can win in November,” Senate Majority Whip John Thune told Politico. “He’s already proven he can’t.”

But the sharpest criticism may have come from Arizona’s Republican Senator, Martha McSally. “Give me a break. This place has enough creepy old men,” she said.

So it looks like my opponent will either be extremist Roy Moore or an extremist handpicked by Mitch McConnell to be part of his legislative graveyard team. Let’s get to work so we can get things done! https://t.co/S1Z2t1z0sZ

This is pure fake news. I can assure everyone that by running, Roy Moore is going against my father and he’s doing a disservice to all conservatives across the country in the process. https://t.co/pjfDKfoIO0

Who in the world are his advisors? At what point does he think another run will have a different response. He does not represent our Republican Party. https://t.co/gZALxRyKV0

Listen folks, keep in mind that the Alabama senate race is still young, which is probably why Roy Moore is interested.