In recent years, the Roman Catholic Church has seen the divide grow between the actions of church leadership and what’s in the hearts of the people they are supposed to represent. This month alone, three separate stories illustrate how this divide is alienating faithful Catholics.

In these three examples from North Carolina, Maryland, and Missouri, Catholic clergy and organizations chose to put rigid church doctrine ahead of human dignity and pastoral care in moves that have generated even more criticism for the church over its position on the acceptance and welcome of LGBT people.

Steav and Bill Bates-Congdon had been together for 23 years before marrying in New York after the passage of marriage equality.

Until being fired on January 19, Steav served as the music director at St. Gabriel Catholic Church in Charlotte, N.C., where parishioners said he was open about his relationship with Bill. Steav even spoke with Rev. Frank O’Rourke before his wedding and said that the pastor congratulated him, but cautioned that he could not give Steav and Bill his blessing. Steav told Rev. O’Rourke that he didn’t expect a blessing for their marriage.

The wedding took place on October 15, 2011. On January 19, 2012, after returning from his honeymoon and then recuperating from emergency surgery to remove his appendix, Steav was handed a note that states, in part: “Your civil marriage stands in direct opposition to the teaching of the Catholic Church, therefore ending your employment with us.” Had he been given any indication that his marriage would lead to him being fired, Steav says he and Bill would have postponed their wedding until after his retirement.

A similar story played out in Missouri, where music teacher Al Fischer was fired from his position at St. Ann Catholic School in Normandy after a representative of the St. Louis Archdiocese learned that he was planning on traveling to New York in order to marry his
partner of 20 years.

Unlike Steav Bates-Congdon and Al Fischer, Barbara Johnson has never been an employee
of a Catholic Church or school. But she, too, has been unfairly singled out by an agent of the church because of who she loves.

Johnson was denied communion by Father Marcel Guarnizo at her own mother’s funeral in Gaithersburg, Md., after the priest heard that she was in a relationship with a woman.

Father Guarnizo also walked out during Johnson’s eulogy and refused to attend the graveside service for her mother. Although the Archdiocese of Washington has issued a statement saying that the priest acted incorrectly, their concern still seems to be with dogma, rather than pastoral care and human dignity.

The Archdiocese’s statement says that Father Guarnizo should have taken Johnson aside and spoken to her in private , but that he still should have denied her communion at her own mother’s funeral.

The actions of the Catholic Church in all three cases call into question whether church leaders are more concerned with obedience and its conservative image than caring and compassion.

Steav Bates-Congton and Al Fischer’s firings are legal, according to the recent Supreme Court decision, Hosanna-Tabor Evangelical Lutheran Church and School v. Equal Employment Opportunity Commission, which reaffirmed that “authority to select and control who will minister to the faithful is the church’s alone.”

But neither man is in a direct ministerial position and both are well-liked and respected in their communities.

Barbara Johnson was already dealing with the grief of losing her mother; Father Guarnizo’s actions, which indicate that he does not consider her a full Catholic, lack compassion for a human being who is already suffering. To magnify her pain by rejecting her from the church was unnecessarily cruel.

All three cases also indicate how out of touch the Catholic Church is with lay Catholics, who overwhelmingly support both LGBT acceptance and marriage equality. And these are just three of the many cases that could have been highlighted.

GLAAD has reached out to all three affected individuals, as well as LGBT Catholic organizations to address these matters.

We extend our sympathy to Barbara Johnson, and wish Steav and Bill Bates-Congton and Al Fischer and Charlie Robin congratulations on both their marriages. We hope that the Catholic hierarchy will come to see that human dignity should take precedence over rigid adherence to doctrine and ask our readers to alert us to any problematic coverage of these and related stories. 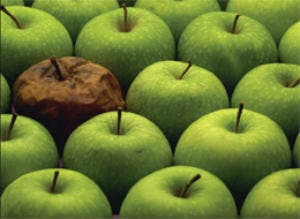