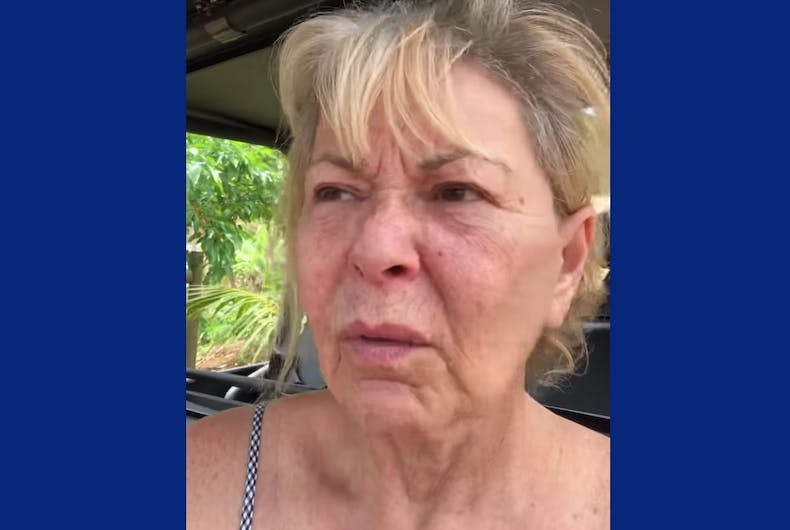 In a bizarre video, actress and comedian Roseanne Barr complained about how she “can’t” use the word “fag” outside the house, and also said that she’s queer.

It does not appear to be a coming out message.

Roseanne posted a video over the weekend to her YouTube channel, which she uses as a vlog. In the video, she complains about gay people using the word “fag.”

“Man, the word ‘fag’ is a really hateful word, isn’t it? Especially when it’s when it’s like one gay calling another gay guy that? Hoo! Have you ever been in the middle of one of them hate marriages? Hoo!”

She went on to complain about how she can’t use the word even though gay people can, although she she used the word in her video and in its title.

“It’s like, wait a minute, we’re not supposed to say that word,” Barr said. “How come you’re saying that word?”

“What? Oh, I just can’t say that word. Well, I can when I’m in the house, but I can’t say it outside the house,” she added, not explaining why she uses the word “fag” in her house.

She then moved on to saying that she’s so queer that she puts “the Q in LGBTQ.”

“Okay, because I am queer as two motherfuckers,” she said. “I’m queer, I’m alien, I don’t belong here with all these people. They makes no sense. They are very queer. That makes me queer, I guess. But I did put the Q in it. Bye!”

Cancel reply
Roseanne complains that she can’t say ‘f*g.’ And did she just come out as queer?