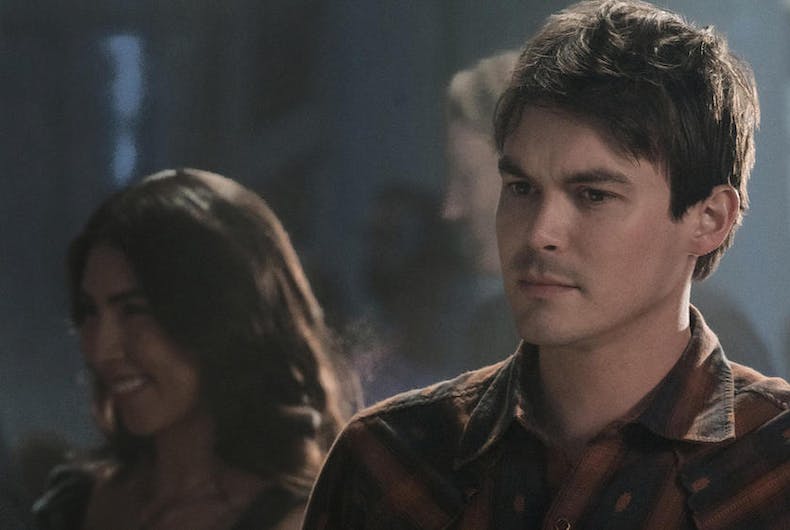 Tyler Blackburn — a 32-year-old actor who plays Sgt. Alex Manes, a gay war veteran and amputee in The CW’s sci-fi drama series Roswell, New Mexico — recently came out as bisexual in an interview with Advocate.com.

He proclaimed, “I’m queer. I’ve identified as bisexual since a teenager.”

But after being bullied for effeminacy during his 10th grade year, he stopped exploring many things he loved out of a “soul-crushing” self-hatred and shame. He dated a few long-term female partners during his 20s, but says he always had an “underlying curiosity” about men.

“I heard so many things from within the queer community about bisexuality being a cop-out or b*llsh*t or the easy way out or something, and that always stuck with me because I felt the pressure from all sides to have [my sexuality] figured out,” Blackburn continued. “For the longest time, I suppressed more of my attraction to men.”

Blackburn first rose to fame by playing Caleb Rivers, a bad boy hacker, in the teen thriller series Pretty Little Liars which ran from 2010 to 2017. He says that near the show’s conclusion, he began to experience the vulnerability and emotional aspects of embracing his bisexuality.

Related: The CW will soon film a pilot for ‘Batwoman,’ making it the first-ever lesbian-led superhero TV show

His character in Roswell, New Mexico is also a hacker, and a gay Air Force veteran who lost his leg during a third deployment in the United State’s 2003 Iraq invasion. Now back in his hometown, his character struggles with post-traumatic stress disorder (PTSD), immigration issues and the challenges of finding queer love while dealing with an abusive, disapproving father, something Blackburn himself somewhat relates to as he had trouble connecting with his own real-life dad.

Blackburn came out to the show’s creator, Carina Adly MacKenzie, while shooting the pilot, and she embraced him and has since strived to make his character’s journey one of strength and compassion, Advocate.com reports.

The actor says he’s grateful that “Now we’re at a place where fluidity is spoken about in such a beautiful way that it doesn’t make me feel as pressured to have it figured out,” and adds that he feels happier and laughs more now that he’s out than he has in a while.

“My goal above everything is to feel as happy as possible,” he says. “What I mean is, I want to feel free.”