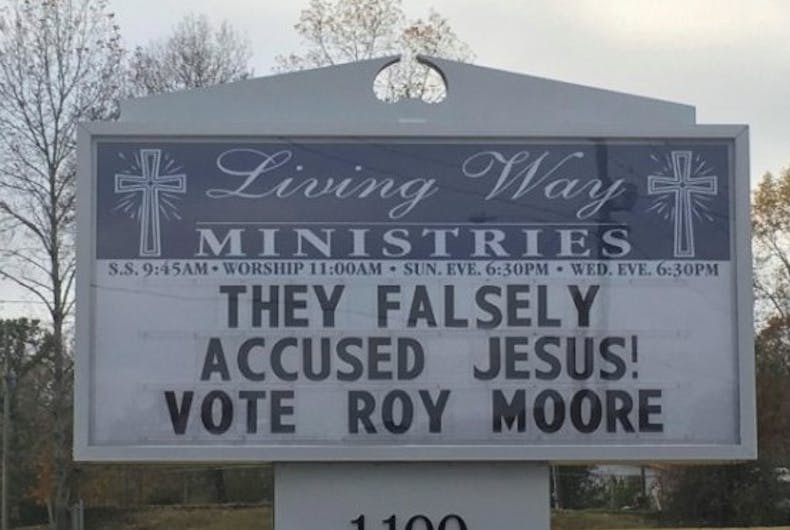 Vox has published a document with talking points Roy Moore’s Senate campaign wants supporters to use to deny the allegations.

Moore has been accused by multiple women of sexual assault and making advances towards them when they were teenagers and he was in his 30’s.

To say that it’s not convincing would be an understatement. For example, when responding to Debbie Wesson Gibson’s claim that she was in a relationship with Moore when he was 34 and she was 17, the Moore campaign argues that Gibson supports his opponent Doug Jones in the Senate election and that he went on a “national radio show” and denied the allegations, as if that should settle the matter.

His campaign’s responses to Beverly Nelson, who accused Moore of locking her in his car when she was 16 after her shift at a restaurant and then groping her, are equally bad. After criticizing her “radical feminist” lawyer, the campaign said that the restaurant didn’t employ 15-year-olds (she said he first noticed her when she was 15 but that the assault happened when she was 16), that some customers said they never saw him there in 1977, and that she said that he groped her near the dumpsters behind the building when the dumpsters are located at the side of the building.

Not only that, the links contained in the document mostly go to conservative websites. Half of them are links to Brietbart, a website that is a constant source of false information for Snopes to debunk. He also linked other wingnut media sources like The Daily Wire and One America News Network, as well as his own campaign website.

The document also attacks the credibility of some of the women. For example, it said that Tina Johnson, who accused Moore of grabbing her butt when she worked for him, pled guilty to theft at some point in her life, which means that no one should listen to her now.

Implicit is the idea that Moore’s own record of dishonesty and law-breaking is irrelevant. He lied about receiving a salary for years from a nonprofit he started and famously lost his job as a judge twice for refusing to follow the law. Maybe he shouldn’t be bringing up credibility.

Overall, it doesn’t look like these talking points are even intended to persuade anyone. Instead, they are supposed to provide plausible deniability for his supporters so that they go out and vote for him. Since his supporters don’t want to believe the allegations, it won’t take much to convince them that all these women are just making everything up.