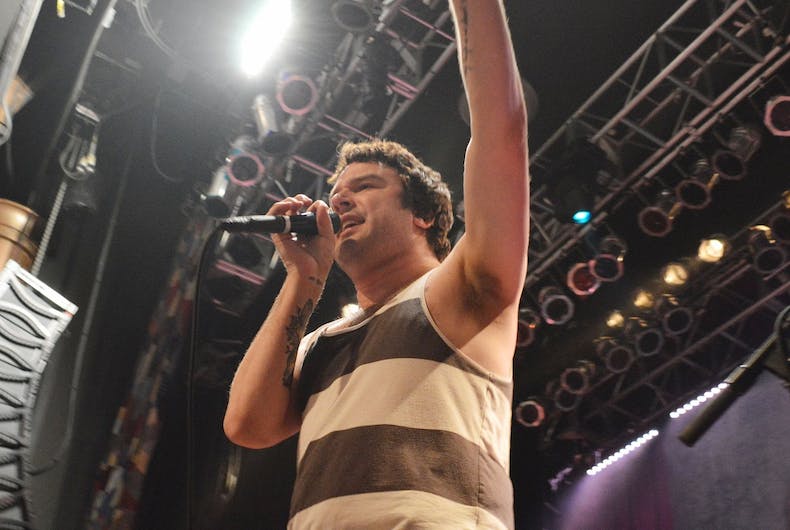 Say Anything performing live at the House of Blues in San Diego, California, in 2014.Photo: Wikipedia

Max Bemis, vocalist for the rock band Say Anything, came out as bisexual in an emotional letter last week.

The letter announces that their latest studio album, Oliver Appropriate, is finished, but that the band is done touring. The 10-page letter is “a statement about my current status as a dude.”

On a page entitled “Gay stuff,” Bemis wrote, “I have always been bi-ish or queer or a straight guy who can also like boys. I always talked or joked about it with my friends and found it to be blatantly clear I was.”

This led to bullying. “I was bullied for it and called a ‘fag’ (without irony). This is, sadly, common. I’m not special.”

Still, he said that he has not suffered homophobia as much as others have.

“I don’t feel threatened or scared because I grew up with some amount of privilege in that regard, coming from a supportive, liberal family. So I’m not minimizing how hard that can be for other people. I get that I have it easy.”

Bemis wrote that people also “minimized” his bisexuality, sometimes attributing it to his bipolar disorder or acting like it wasn’t real because he has been in a monogamous relationship with a woman for years.

“I’ve always been somewhat of a monogamist and my queer experiences were limited and remain mostly emotional ones,” he wrote.

This all informed Oliver Appropriate, which Bemis says is about someone who’s the opposite of himself.

“Years of being ‘that guy’ led to exhaustion with explaining myself to everyone,” he wrote. “So I chose to write a full length about a self-loathing, lightly homophobic misogynist; essentially my opposite as a semi-actually-kinda-gay neurotic moralist who has been married to the female love of my life for ten years.