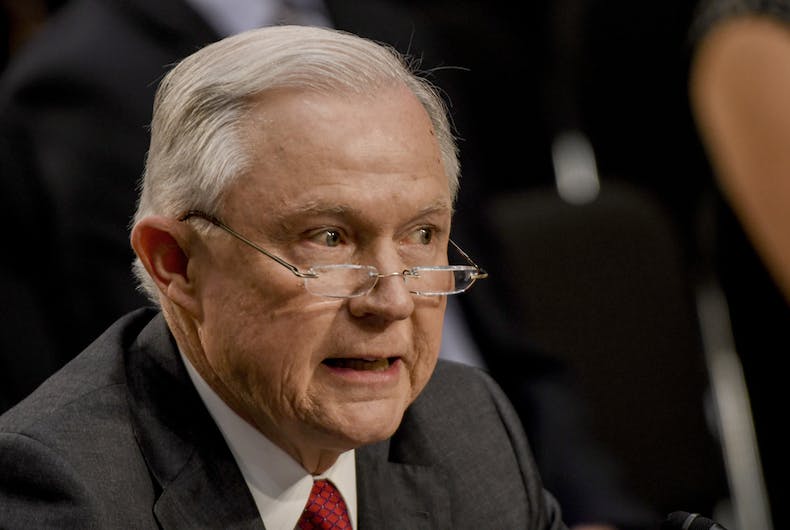 US. Attorney General Jeff Sessions reads his prepared opening statement after being sworn in to testify in front of the Senate Intelligence Committee. Washington DC, June 13, 2017.Photo: Shutterstock

“The devil can cite Scripture for his purpose.
An evil soul producing holy witness
Is like a villain with a smiling cheek,
A goodly apple rotten at the heart.
O, what a goodly outside falsehood hath!”

–William Shakespeare, The Merchant of Venice

The devil leads the alleged Department of Justice as Attorney General Sessions, who quoted scripture to justify the Trump administration’s choice to follow a never used government policy to physically separate parents and children of undocumented migrants seeking sanctuary as they flee oppression in their native countries.

As Ivanka Trump tweeted a lovely picture of her and her daughter enjoying a beautiful D.C. late spring day together, Sessions invoked the words of the Apostle Paul from the Christian testaments “to obey the laws of the government because God has ordained the government for his purposes.”

“Orderly and lawful processes are good in themselves. Consistent and fair application of the law is in itself a good and moral thing, and that protects the weak and protects the lawful.”

Unfortunately, Sessions referenced merely the opening segment of the text. He conveniently deleted Romans 13: 8. “Owe nothing to anyone – except for your obligation to love one another. If you love your neighbor, you will fulfill the requirements of God’s law.”

Since Sessions has implemented this draconian policy, I.C.E officers have taken well over 11,000 children from their parents under the guise of temporarily taking them to the showers for hygienic purposes, without returning them as promised. Parents are then transported into federal custody to await trial and almost certain deportation, while the Department of Health and Human Services places the young people in detention facilities.

An estimated 1400 boys between the ages of 10-17 have been placed in an abandoned Walmart near Brownsville, Texas, where they are released outside into the sunshine for only 2 hours a day. Some boys sleep in the same rooms as older adults for weeks at a time.

MSNBC reported that no matter how the administration would like to represent it, this is a prison-like environment. “This place is a ‘shelter, but effectively these kids are being incarcerated” Jacob Soboroff said.

One of the HHS workers encouraged Soboroff upon entering to make certain that he smiled at the youth because when outsiders enter the building “they feel like animals in cages being looked at.” Near the entrance of the facility, a painted mural depicts President Trump with a large American flag and the White House.

The Statue of Liberty, herself an immigrant, weeps uncontrollably today. Her tears have all but extinguished her once brilliantly radiant beacon of welcome to the “tired and poor” of the Earth.

Wipe aware her tears Mr. Sessions by quoting and living this Biblical inscription, “Children are a heritage from the Lord, offspring a reward from Him.” (Psalm 127: 3)

But one of the litmus tests by which a society can be judged is the ways it treats its young people. On this test, the Trump administration has shown its toxic acidity that has significantly eroded our nation’s democratic institutions.

Attorney Sessions’ actions, by serving at the “pleasure” of the President, will go down as a shameful event in the annals of U.S. immigration history. It has already resulted as a deeply embedded and permanent stain on the soul of the country, and a life-long trauma on the psychological health of the youth and their family members.

Cancel reply
Sessions cited the Bible to defend stealing children, but he omitted a key verse