But a critical question remains: Do LGBTQ pride marches or parades continue to serve a vital function, or should we begin to eliminate them?

Post-World War II, the U.S. entered the Cold War and a swing back to political and social conservatism. On the floor of the Senate, the brash Senator Joseph McCarthy from Wisconsin sternly warned that Communists corrupt the minds and homosexuals corrupt the bodies of good upstanding Americans – and he proceeded to have them officially banned from government service.

During this era, police frequently raided gay bars, which were usually Mafia owned while the U.S. Postal Service raided homosexual organizations and even published the names of their mailing lists in local newspapers.

Homosexual and gender non-conforming people were often committed to mental institutions against their will. Some were forced to undergo painful and damaging electro-shock therapy, and some underwent frontal lobotomies.

A coalition of groups in what was then known as the Homophile Movement, including the organization One Inc. from Los Angeles, chapters of Daughters of Bilitis and the Mattachine Society, joined in a public demonstration in front of the White House on October 23, 1965 to protest the federal government’s official policy of “discrimination and hostility against its homosexual American citizens.”

The homophile leaders notified demonstration participants that they needed to present themselves in respectable attire: men in suits and ties, women in dresses and heels. In addition, Mattachine and DOB sponsored an “Annual Reminder” on July 4, from 1966 through 1969 at Independence Hall in Philadelphia as a visibility action.

These “reminders” were the forerunners of the modern annual LGBTQ Pride marches.

There are moments in history when conditions come together to create the impetus for great social change. Though organizing around “homophile” equality began during the 1950s and throughout the 60s in selected cities in the United States, many historians place the beginning of the modern movement at the Stonewall Inn, a small bar frequented by gay and gender non-conforming people in New York City’s Greenwich Village.

At approximately 1:30 AM on the morning of June 28, 1969, New York City police officers conducted a routine raid on the bar on the charge that the owners had been selling alcohol without a license. Feeling they had been harassed far too long, patrons and members of the community challenged police officers with varying intensity over the next five nights in a violent confrontation now known as the Stonewall Riots.

Even before that night, a lesser-known action preceded Stonewall by nearly three years and should more likely be considered as the founding event for the modern LGBT movement.

In August 1966, at Gene Compton’s Cafeteria, in what is known as the Tenderloin District in San Francisco, trans people and sex workers joined in fighting police harassment and oppression. Police, conducting one of their numerous raids, entered Compton’s and began physically harassing the clientele.

This time, however, people fought back by hurling coffee at the officers and heaving cups, dishes, and trays around the cafeteria. Police retreated outside as customers smashed windows. Over the course of the next night, people gathered to picket the cafeteria, which refused to allow trans people back inside.

Out of the ashes of Compton’s Cafeteria and the Stonewall Inn, people, primarily young, formed several militant groups. One of the first was the Gay Liberation Front.

GLF was not a formalized organization per se, but rather a series of small groups across the U.S. Members insisted on the freedom to explore new ways of living as part of a radical project of social transformation.

People from this newly-emerging LGBTQ liberation movement organized the first Christopher Street Liberation Day March in June 1970 down New York City streets ending in Central Park. Today in large cities and small towns across the globe, annual Pride marches and parades commemorate the joy and the continuing struggle for our rights.

The Changing Face of Pride

Since those early years, Pride Marches have served the function of increasing our visibility, of putting society on notice that we will no longer allow others to lock us away in a deep and dank closet of denial and fear, and that we are “here and queer” and they had better get used to it.

Pride marches recharged our activist batteries throughout the attacks by the political and theocratic right, whether the vicious campaigns to deny us legal protections under the law and attempts to turn back ordinances where they existed or to counter the governmental inaction in the face of HIV/AIDS.

Pride marches have further regenerated our need to provide positive and empowering role models to youth who are still struggling, to affirm our rights to raise children and to marriage equality, and to demand an end to the hatred and violence that fuels the battering and murders of members of our communities, and, in particular, trans women of color.

But have we reached a limit to the benefits gained from these marches?

Over the years, the “pride” marches of the past have morphed into parades and festivals funded by major corporate sponsorship, and capitalist consumption. Parade contingents now include large banners affixed with familiar logos of banks, insurance, alcohol, and technology companies.

While we may still receive some benefits from the parades, the capitalist system seems to have employed the representation of “we are just like you” in its attempts to co-opt our critique and possible challenge to that very system.

Ironically, some of these same companies not so long ago refused to hire “out” members of our communities, but now, seeing that our business will improve their economic bottom line, they are enthusiastically welcoming us.

Along the parade routes and at rally sites, companies and individuals display and sell their wares, from internet and phone company subscriptions to rainbow colored everything imaginable.

Merchants and artisans appropriated the pink triangle — the Nazi patch gay men were forced to wear on their clothing when incarcerated in concentration camps — to craft glimmering pink Rhinestone jewelry worn as glamorous fashion accessories.

I call all this consumerism “the tchotchetization of a movement” (“tchotchke” in Yiddish means knick knacks, small objects, etc.).

Throughout the world, issues of homosexuality, bisexuality, and gender diversity are increasingly “coming out of the closet.” We see young people developing positive identities at earlier ages than ever before.

Activists are gaining selective electoral and legislative victories. Primarily in academic institutions, greater emphasis and discussion is centering on what has come to be called “queer theory,” where educators and students analyze and challenge current notions of sexuality and gender constructions.

Let us revel in our past victories, for we have fought tirelessly for them. But let us not dwell here because we have much further to go to ensure a truly just society.

In the final analysis, whenever anyone is diminished, we are all demeaned. When anyone or any group remains institutionally and socially marginalized or disenfranchised from human rights, the possibility for authentic community cannot be realized.

Maybe soon, especially under the current Trump regime, we can reignite the revolutionary and transformational flame that was Stonewall. 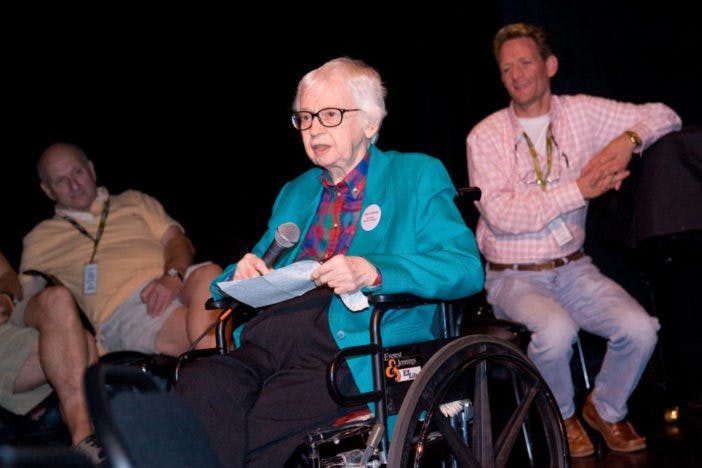 Kay Tobin Lahusen was the first photojournalist of the LGBTQ movement, a pre- and post-Stonewall activist who helped to document the earliest protests for homosexual…

Cancel reply
Should we retire pride parades or do they have value in modern America?