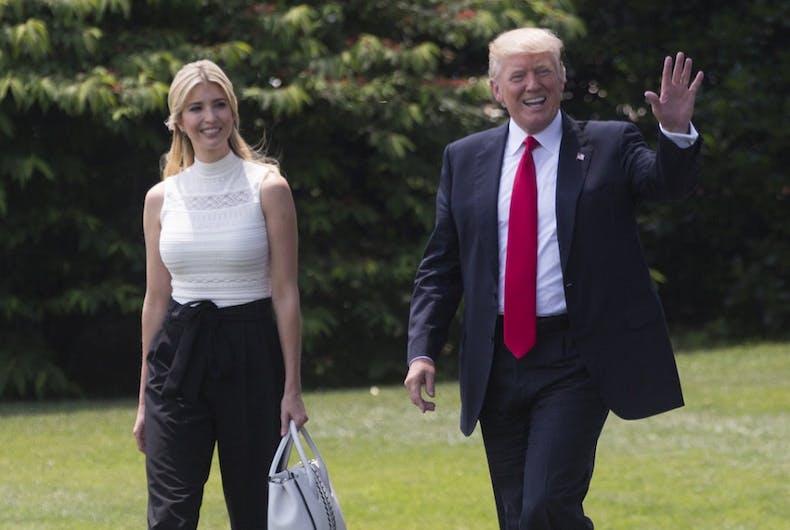 Donald Trump with daughter Ivanka, who several months ago some people were predicting would be a moderating force in the White House, especially on LGBTQ issues.Photo: Wikimedia Commons

The Washington Post published a story last night about Trump’s legal team trying to undermine Robert Mueller’s investigation into the campaign’s possible collusion with Russian agents to undermine the election. Liberal media, however, has focused almost exclusively on a nugget of info originally buried in the article (but now expanded and pushed toward the top of the story).

“Trump has asked his advisers about his power to pardon aides, family members and even himself in connection with the probe, according to one of those people,” the sentence reads in the article headlined “Trump team seeks to control, block Mueller’s Russia investigation.”

The media has exploded with talk about whether pardoning someone would be a de facto admission of guilt (it is), who would get pardons, and what it means that he’s asking about pardons for his family as both his son-in-law, Jared Kushner, and idiot eldest son, Donald Trump, Jr., are becoming bigger targets in the investigation.

With the probe expanding into Trump’s business ties to Russia and possible financial crimes that pre-dates his presidency, Trump has every reason to worry. Most of his children have worked for him at the family business. He won the election by touting his business acumen despite his multiple bankruptcies, exaggerated wealth, and the ghost writer of his Art of the Deal book admitting that it was all bullshit. His business empire is his pride and joy, coming in second to only one thing: his daughter, Ivanka Trump.

She has her own foreign business deals that look a little shady. An expanded investigation would likely draw in her shenanigans (if any) too.

Here’s the hard truth that no one wants to admit: If there was the chance – no matter how remote – that your loved ones could go on trial and be sentenced to prison, you’d be asking about pardons too. Kushner may not be his flesh and blood, but he’s a top advisor and Ivanka’s husband.

Leaving aside the shocking news that Trump’s legal team is trying to undermine a federal investigation by “actively compiling a list of Mueller’s alleged potential conflicts of interest, which they say could serve as a way to stymie his work,” is a stupid mistake. There’s a reason why that fact headlined the Post story.

And if we’re gonna focus on the pardons, pardoning himself is a much bigger deal. After all, it’s an unanswered question (no president has ever done it) and if he did it and then insisted on staying in office, would he be able to be impeached? Or would the pardon cover any crimes he may have committed as a businessman or President?

Those angles are much more important than whether or not he might want to pardon his kids. Of course he would if it came down to it. You would too.