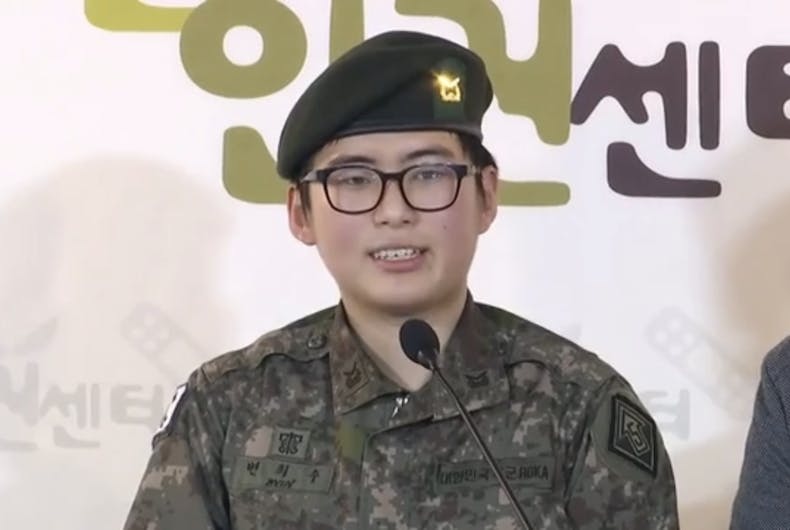 In a press conference following the military’s announcement, Byun pledges to sue for her right to stay in the Armed Forces.  “I will continue to fight until the day I can remain to serve in the army,” she said. “I’ll challenge the decision until the end, to the Supreme Court.”

During the press conference, she broke down in distress while recounting the months of depression and dysphoria she endured before having the surgery in November — overseas, in Thailand.

“It was an extremely difficult decision to let my base know of my identity, but once I did, I felt much better…I thought I would finish serving in the army and then go through the transition surgery and then re-enter the army as a female soldier. But my depression got too severe,” Byun told reporters.

Byun first joined the army in 2017, as was her lifelong dream. She was South Korea’s first known active transgender soldier. Prior to the press conference, she had been anonymous. She held the rank of staff sergeant, working primarily as a tank operator and claiming she received perfect marks on recent exams.

A military spokesman confirmed that officials found out about the Byun’s “loss of male genitals” through tests at a military hospital, where she has been kept since. A panel determined that the military can consider this “a mental or physical handicap,” since Byun entered service classified as a male. This corresponded to the panel determining that Byun was “unable to continue service”, and subsequently discharged her. Due to South Korea’s friction with North Korea, the former’s military is a conscript army, meaning all ‘able-bodied males’ are required to serve for two years.

The Military Human Rights Center for Korea, an advocacy group in Seoul, noted that it was unusual for the army to issue an immediate discharge for Byun. The standard discharge period is three months, but the South Korean Army asked for Byun to leave the military hospital she has been housed in by tomorrow.

“Regardless of my sexual identity, I’d like to show everyone that I can become one of the great soldiers who protect this country. Please give me that chance,” she read on.

Same-sex relations between military personnel is prohibited and punishable for two years in prison, and now transgender people can be removed as well.