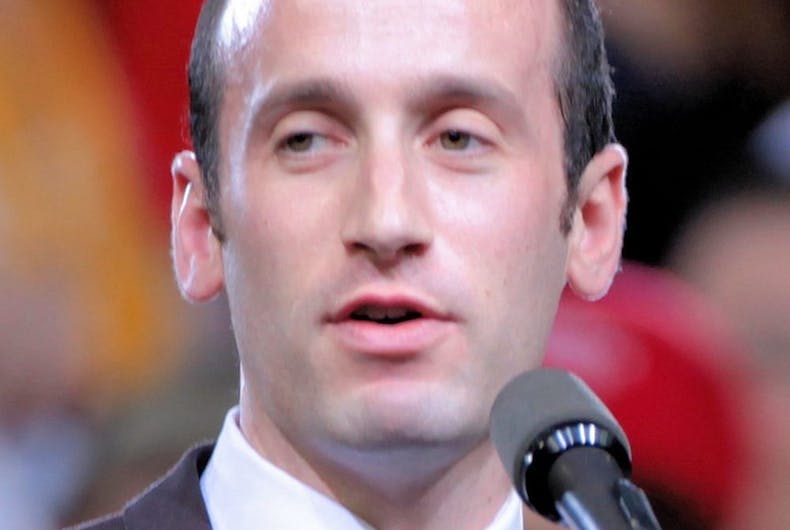 Let’s be perfectly clear: Supporters of xenophobic racist nationalism shut down the U.S. government this week. This was not, as Republicans would tell us, “The Schumer Shutdown,” or “The Schumer and Pelosi Shutdown,” of “The Democrat Shutdown” writ large.

Lindsey Graham, senior South Carolina senator, confirmed this last point during an interview with a reporter on MSNBC. He blamed the impasse on bad counsel from Miller to the President.

“I think the change comes about from people like Mr. Miller,” Graham said. “Mr. Miller is well-known in the Senate for having views that are outside the mainstream.”

Graham continued that the “Stephen Miller approach to immigration has no viability.”

Miller is widely known as the architect of Trump’s seven-nation Muslim ban in its various incarnations. This along with his hardline immigration stands has made Stephen Miller the former KKK Grand Wizard and rabid anti-Semite, David Duke’s, favorite Jew.

Stephen Miller is good – and he’s 100% correct, this JUdicial supremacy needs to be put back in its place. Honestly, it’s totally insane… https://t.co/hvD9ZVZZ8V

Yes, Stephen Miller grew up in a liberal Jewish household in Santa Monica, California. His father, Michael D. Miller was a real estate investor (maybe Trump found this endearing), and his mother, Miriam (Glosser) Miller’s family immigrated to the U.S. as desperate refugees in the early 1900s from Belarus to escape horrific anti-Semitic pogroms.

It appears that Miller is attempting to prove Santayana wrong, though, by forgetting his own history while believing he is not destined to repeat it.

Though Jews had little control over their lives in many European countries, the stereotype that they are obsessed with money and power, that they control politicians, the media, and banking systems, and they are interested in world domination persists into the modern era.

Though some individuals and groups stood up to shelter Jews, including some Muslims, most of the world, including the United States abandoned European Jews during the Nazi era.

As a case in point, several German Jews who could afford to book passage in May 1939 on the passenger ship, “St. Louis,” sailed from Europe toward North America. When the ship arrived in Havana harbor, the Cuban government refused to honor the passengers’ landing permits. The ship then headed for the coast of the U.S. but authorities, on order of President Franklin Delano Roosevelt, denied the ship’s passengers temporary haven. Having no other options, the captain turned back to Europe, where many of the passengers were eventually murdered.

Laura Delano Houghteling, cousin of Franklin Delano Roosevelt and wife of the U.S. Commissioner of Immigration sternly warned, “20,000 charming children would all too soon, grow into 20,000 ugly adults.”

A January 1939 survey conducted by the American Institute of Public Opinion asked residents: “It has been proposed to bring to this country 10,000 refugee children from Germany – most of them Jewish – to be taken care of in American homes. Should the government permit these children to come in?”

Stephen Miller and the majority of his Republican co-conspirators do a great disservice to our country because their actions, their policies, their characterizations of immigrants from other nations makes our compassionate and grand Statue of Liberty weep.

We would all do well to take Santayana’s warning more seriously! Ethnocentrism continues to rear its head within the United State through anti-immigrant sentiments by political leaders exerting nativist and nationalist warnings. In the year 1939,… Cancel reply
Stephen Miller is behind the ill-fated government shutdown