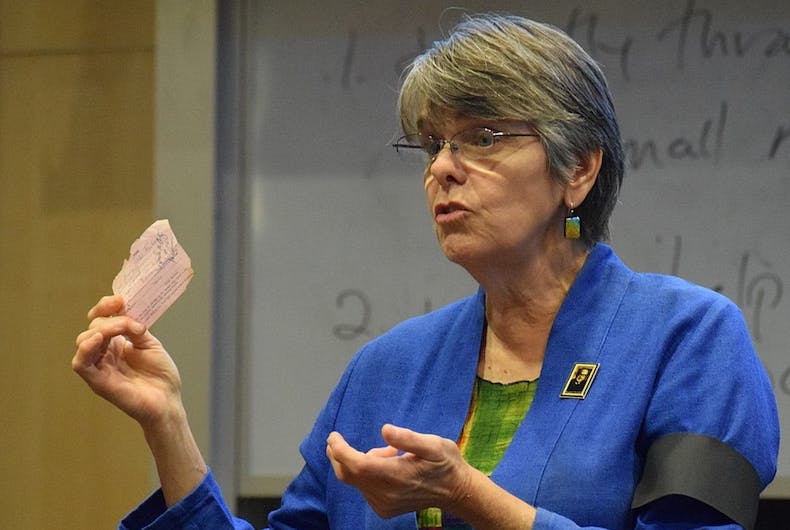 The parallels are striking. Young people see injustice, and they rise to protest.

In 1965, Mary Beth Tinker was 13, a middle-school student in Des Moines, Iowa, when she joined her brother and a few other students brave enough to protest racial inequality and the expanding Vietnam conflict.

They wore black armbands to school. They were suspended. The protest launched a legal journey to the U.S. Supreme Court, which affirmed the rights of students to protest in the 1969 Tinker v. Des Moines Community School District decision.

Related: Here’s what conservatives are blaming for the last school shooting instead of guns

“It’s wonderful to see young people speaking up for their own interests,” Tinker said to LGBTQ Nation in an exclusive interview. “In my experience, as a pediatric nurse, when things are good for children and teenagers, it’s better for everyone.”

Tinker says she’s not surprised at how today’s students are responding. She has spent four years touring the nation, speaking to students and educators, and hearing their causes and concerns.

Parkland, Florida, student Emma Gonzales, who has captivated the nation with her forceful remarks after the shooting at her school, mentioned Tinker’s landmark case during her speech in Fort Lauderdale.

“I don’t hear students quote the case often,” Tinker said, “but I’m glad she connected it.

“It means that, in a democracy, yes, you can change things. You can even change laws.”

Tinker said she has seen growing student activism over the last decade. “I get the feeling when I’m out in the schools that there’s something going on, there’s something in the air, when it comes to young people and activism.”

Back in November 2013, Tinker visited Marjory Stoneman Douglas High School at the invitation of journalism and English teacher Melissa Falkowski, who has been also interviewed after the Feb. 14 massacre at the school. Tinker turned to her notes from that particular trip. The students then talked about many of the same topics other students do — Dress codes. Budget cuts to arts and music classes. Marijuana laws. Even the safety of the whales at Sea World.

Tinker said she identifies with all of the students and their stories. The experiences after her historic protest affected her own coming-out process.

“I was afraid to come out as gay as a teenager,” she said. “I was so afraid. After we wore the armband, these haters came out of the woodwork. We were threatened. People threw red paint at us and called us communists.”

Related: 5 examples that prove the NRA hates LGBTQ people as much as gun control

She said her first girlfriend also struggled, before she committed suicide at age 30.

“I can really identify with these teenage kids who are gay. And I know it’s not easy. I’m glad it’s easier now than it was, and I’m so aware that that didn’t just happen. It’s because people sacrificed through the years,” she said.

Among those people was her sister. Bonnie Tinker, also a lesbian, led the Portland, Oregon, group Love Makes a Family, which rallied support for same-sex marriage. Bonnie died in 2009.

“When we finally won the Obergefell case, when that was argued, I went to the Supreme Court with a sign that said ‘Thanks, Bonnie,’” Mary Beth said. She credits her parents, who were Methodists and Quakers, with a keen sense of social justice and activism. She is is married to Kesh Ladduwahetty, also an activist in DC politics and DC statehood issues.

The latest wave of student protest on gun violence is no different from her own struggle, she said.

“There’s a powerful combination when you have emotion, combined with examples of people taking action about something they care about. It’s inevitable, after what they’ve been through. They have examples to follow,” she said.

Social media is a key component for them, too, she said. “Now you can be in touch with others who do take a stand. That is a positive thing, when you do connect with others. It’s a great way of life,” Tinker said.

“These kids are picking up the baton. It’s wonderful and heartening, and I know there are so many young people taking it from here.”

What’s ahead for today’s student protestors?

“I don’t know,” Tinker said. “I don’t know what the future holds, but I know a lot of other adults will stand with them and be their allies.” She cited the groundbreaking work of Gays Against Guns.

“I know I’m going to do my part to put some wind in their sails. They are not alone. I want them to know that.”