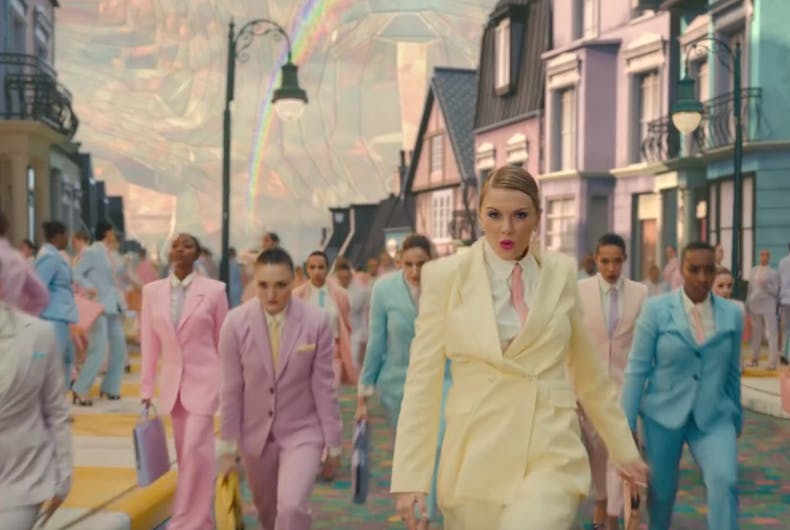 Taylor Swift in her video for “Me”Photo: Screenshot

Taylor Swift dropped the video for her new single, “Me,” last night and it is about as gay as possible.

Fans thought Swift might come out as pansexual in the track, but, alas, it was not to be. Still, the collaboration with Panic At The Disco’s Brendon Urie could be 2019’s queer anthem.

Swift had teased the release, featuring women in suits the color of the pansexual flag, unicorns, rainbows and fabulous outfits, with an interview with out newscaster Robin Roberts.

Related: Taylor Swift surprised a gay fan at his engagement party & her fans are living for it

“‘Me!’ is a song about embracing your individuality and really celebrating it and owning it,” Swift said. “I think with a pop song we have the ability to get a melody stuck in people’s heads, and I just want it to be one that makes them feel better about themselves.”

Last month Swift made a large donation to the Tennessee Equality Project to fight the state’s “slate of hate” legislation that targets the LGBTQ community for discrimination.

“I’m writing you to say that I’m so inspired by the work you do, specifically in organizing the recent petition of Tennessee faith leaders standing up against the ‘slate of hate’ in our state legislature,” Swift wrote in a note included with the donation. “Please convey my heartfelt thanks to them and accept this donation to support the work you and these leaders are doing. I’m so grateful that they’re giving all people a place to worship.”