I’ve called myself an activist since coming out publicly at the University of Wyoming and joining the queer student group in the mid-nineties, and being a gay activist in a conservative, predominantly rural setting requires a fair amount of patience and tact.

I have almost 20 years of experience in politely and respectfully framing my arguments so as not to offend the “other side” of the issue. Everyone has the right to their own opinion, right? I really do try to stay calm although most LGBTQ folks can tell you that’s not always an easy task these days.

For example, in April 1999 I was a co-creator of Angel Action, the counter-protest against Fred Phelps and the Westboro Baptist Church. Ten friends and I managed to stay calm and silent while standing mere feet away from a man I refer to as “a professional bigot.” We stood in silence, wearing our most angelic smiles while Uncle Freddie made comments like “you have the whiff of brimstone about you.” Maybe the wings made the difference?

Most recently, I’m finding it unusually difficult to avoid the urge to scream at the seemingly endless parade of pundits and spin doctors tell me, in their most deferential and conciliatory tones, that the rash of proposed “religious protection” laws are not about discrimination.

Oh heavens no! They’re really just there to protect defenseless religious folk from the godless gays. Like innocent business owners, who could be accused of discrimination, just for standing behind their deeply held religious views.

Not surprisingly, they can provide no examples where this kind of hypothetical religious discrimination has occurred, though Anderson Cooper and other journalists have asked often and pointedly the response has been; it might — But they want us to understand that they are NOT trying to discriminate.

Never mind that actual discrimination against LGBTQ people occurs daily and, in many places in the U.S., there’s no law preventing it.

I’ve been spinning my wheels trying to frame a response in my usual polite and respectful manner, and think I’ve finally landed on something appropriate.

Apparently trying to play nice hasn’t worked, so it’s time to call it what it is. Hate. Discrimination. Bigotry. You can couch it in terms like “religious freedom” all you like, but it doesn’t make the emperor any less naked.

In Virginia legislators spoke out against such an “abominable” type of relationship, warning it will “pollute America.” A Republican senator from Wisconsin said such marriages should be forbidden “simply because natural instinct revolts at it as wrong.” Tennessee attorneys tell us such unions should be illegal because they are “distasteful to our people and unfit to produce the human race.”

Finally, a noted psychologist commented “I believe that the tendency to classify all persons who oppose gay marriage as ‘prejudiced’ is in itself a prejudice. Nothing of any significance is gained by such a marriage.”

If you’ve been watching or reading the news lately, those arguments sound pretty familiar since they’ve been around for a long time. They originally referred to interracial marriage, and the first three were made between 1863 and 1924.

That’s right, the logic being used to deny same-sex marriage dates back to the Civil War.

The last quote is from a brief in the 1967 Supreme Court case Loving v. Virginia which established interracial marriage as a fundamental right between two consenting adults.

“No, we’re not hateful people; you’re the ones discriminating against us because you don’t respect our religion.”

Would anyone today care to make the argument that allowing interracial marriage violates religious freedom?

Individuals enjoy a number of rights and liberties, including the freedom of religion, but businesses are not individuals. Your cake shop is not a Christian, though its owner might be.

When you start a business it becomes subject to another set of laws and responsibilities. There are city ordinances, health codes, and tax laws that are separate from those for individuals.

As a business owner you get to decide a lot of things, but you do not get to pick and choose your customers. You agreed to rules of which one says you have to serve everyone equally.

You can’t turn them away because of the color of their skin or perhaps your religion takes a dim view of women in the workplace. But, refuse to hire a qualified female applicant and it’s discrimination. Sexual orientation is no different. My money is just as green and your public business is, by law, open to ALL of the public, of which I am also a part.

We already dealt with the question of whether or not a business can deny service to someone based on the belief that they are immoral, inferior, or otherwise distasteful; we determined that you have to let EVERYONE sit at your lunch counter and it is NOT a violation of your rights.

So yes, I’m mad as hell. I’m tired of hearing that LGBTQ folk aren’t really being discriminated against. I can’t get married to the person I love and, after going through a surrogacy process that nobody really knew how to “deal with,” I still have no guarantee that the courts will allow me to be a dad.

But by all means, remain convinced that writing the names of two men on the cake is on the same level of discrimination I face daily because it’s your right, and I WILL be the first person to defend your right to think that way.

However, if you can’t abide by the rules and serve all customers equally, please remember that you will be viewed through the same lens as those who ran customers away from their lunch counters, sometimes violently. Don’t say you weren’t warned.

Even though I’m feeling fed up this week, I am also hopeful. I am returning to calmness and an angelic smile with the aware that those trying to prevent equality are getting desperate.

Some of the voices speaking up against these laws are doing so for the first time. Some of whom are prominent Republicans with a long history of voting against our community. Others are religious leaders from denominations that haven’t always been welcoming.

As the legislation becomes more ridiculous, more people realize that their attitudes are only one or two steps removed.

They will realize that we as a nation already KNOW bills like these are hateful, ugly, and beneath us. We know because we’ve done this before, and at least some of us learned from those mistakes.

Jim Osborn is the EEO and Diversity Specialist for the office of Diversity and Employment Practices at the University of Wyoming. A longtime LGBT rights activist in Wyoming, Osborn was the co-creator of Angel Action, the counter-protest against Fred Phelps and the Westboro Baptist Church during the trial of two men responsible for the murder of his friend, Matthew Shepard.

Opinions and advice expressed in our Views & Voices columns represent the author’s or publication’s own views and not necessarily those of LGBTQ Nation. We welcome opposing views and diverse perspectives. To submit a article, column or video, contact us here. Due to the volume of submissions received, we cannot guarantee publication, however you are invited to express your opinion in the comment section below.
Categories: Commentary
Tagged: Discrimination, Religious Freedom 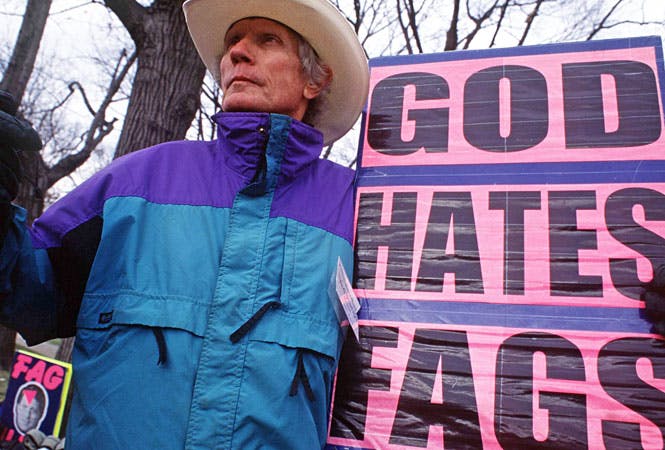 Fred Phelps I have been fighting for LGBT rights for a long, long time. Fred Phelps was not always in that fight, but if feels…