While running for president, Donald Trump said at campaign rallies that he would be a different kind of Republican because he would defend and strengthen LGBT protections.

At the 2016 Republican convention, he posed with a rainbow flag with the words “LGBTs for Trump” scrawled across the yellow stripe.

This should have been a clue to his cowardice and deception once he took over the chains of power because, since moving into the White House, the Trump administration has declared total war on the transgender community.

His latest salvo attempts to render trans people invisible and silent under the law.

In a memo sent to major government agencies, the Trump administration ordered that the definition of “gender” must be based “on a biological basis that is clear, grounded in science, objective and administrable.”

This means that the sex of everyone must accord with the binary of “male” or “female” determined by the genitals a person a born with, unless genetic tests determine otherwise.

Though federal civil rights laws currently protect transgender people through such statutes as Title VII, Title IX, and the Affordable Care Act, the Trump administration’s obvious intent is to nullify and further excite its base by going after trans people in advance of the upcoming mid-term elections.

This latest action follows a long and cynical string of destructive battles this administration has waged against trans citizens.

In an earlier memo sent from his Department of Justice to U.S. attorneys, department heads, and federal agencies, Trump’s Attorney General, Jefferson Beauregard Sessions, reversed an Obama-era policy that protected trans employees from discrimination under Title VII of the Civil Rights Act of 1964. Session made clear that his department would no longer interpret gender protections in Title VII to include gender identity and expression.

Since Trump’s inauguration, he abolished an Obama-era executive order permitting transgender students to use school facilities most closely aligning with their gender identities, and the White House website has removed reference to LGBTQ issues and policies from the previous administration.

When the Trump administration promoted its 2017 “American Heroes Week,” the alleged Commander-in-Chief let it be known in a torrential three-tweet series that he does not include trans people in the category of “American Heroes,” especially those currently and previously serving in the U.S. military.

After consultation with my Generals and military experts, please be advised that the United States Government will not accept or allow……

….Transgender individuals to serve in any capacity in the U.S. Military. Our military must be focused on decisive and overwhelming…..

….victory and cannot be burdened with the tremendous medical costs and disruption that transgender in the military would entail. Thank you

At that time, the United States added its name to an ever-increasing list of 20 other nations welcoming trans people into their military ranks, with the Netherlands as the first as far back as 1973. A sampling of others includes Australia, Bolivia, Canada, Germany, Israel, New Zealand, and Spain.

In addition, Rand found that merely 25 to 130 active-component trans military personnel have deployment restrictions due to transition-related medical treatments. In comparison, 50,000 active-duty soldiers in one single branch, the Army, cannot deploy for medical and other reasons.

Another of Trump’s assaults on the trans community came in the form of a yet another rollback of protections initiated by his immediate predecessor.

The Obama administration issued a policy directive manual enumerating the rights and responsibilities of transgender people in prison related to several areas including housing, strip searches, and medical care. The directive advised respect and protection of transgender inmates and, on a case-by-case basis, the possibility of residence in prisons matching their gender identities.

Trump’s expected dismantling of protections will have wide-ranging negative effects.

These high rates are associated with disproportionate poverty, homelessness, societal and workplace discrimination, involvement in street economies, and sometimes, bias from law enforcement. They are also at higher risk for harassment, abuse, and violence in juvenile detention facilities, jails, and prisons.

Trump’s actions are intended to harden his appeal of the base feelings with his base of support by targeting scapegoats for his failed policies and increasingly failed presidency.

Trump’s not-so-surprising assaults on trans people has the heavy thump print of Vice President Mike Pence who, in his first congressional campaign in 2000, argued for public funding of so-called “conversion therapy” for LGBTQ people. On his website at the time, his disdain for same-sex attractions and sexuality stands out:

“Congress should support the reauthorization of the Ryan White Care Act only after completion of an audit to ensure that federal dollars were no longer being given to organizations that celebrate and encourage the types of behaviors that facilitate the spreading of the HIV virus. Resources should be directed toward those institutions which provide assistance to those seeking to change their sexual behavior.”

Pence opposes marriage equality and LGBTQ non-discrimination protections, and as governor of Indiana, helped to pass the so-called Religious Freedom Restoration law allowing businesses to discriminate against LGBTQ people. The state was forced to amend the law after experiencing serious political and financial push back.

Trump, by choosing Pence, has added LGBTQ people to his already extensive list of scapegoated “Others,” which include Mexicans and all Central and South American-heritage people, First Nations peoples, Muslims, people with disabilities, all women, and NFL players and coaches taking a knee in solidarity with groups like Black Lives Matter protesting police attacks on black and brown people.

By choosing Pence, Trump has double-downed in his attempts to divide and conquer the electorate by instilling fear in promising the bigoted the “freedom” to discriminate to the fullest extent of the law without the threat of prosecution.

Members of the trans community often suffer the consequences of other truth tellers of the past. Nearly every two to three days, a person, like those highlighted throughout this commentary, are killed somewhere in the world for expressing gender diversity. The overwhelming majority of murders are of trans women of color.

We must all stand up and be counted against the scurrilous attacks perpetrated by the Trump administration.

We must not permit the policymakers, the majority presumably heterosexual and largely cisgender male, to dictate policy over whether transgender employees and students are protected against discrimination, and whether trans service members are granted permission openly to serve their country.

And we must not allow anyone, policymaker or otherwise, to demean, intimidate, harass, violate, or murder anyone, including our dear transgender worriers.

As we all know only too well the answer to the question Trump asked of black people during his campaign, “What the hell do you have to lose?” we also see the yellow stripe Trump ripped off the rainbow flag, which he attached it to his spine.

GOP leaders are unified in their continued support for Judge Brett Kavanaugh as President Trump’s nominee to the Supreme Court. They denounce Democrats of trying… 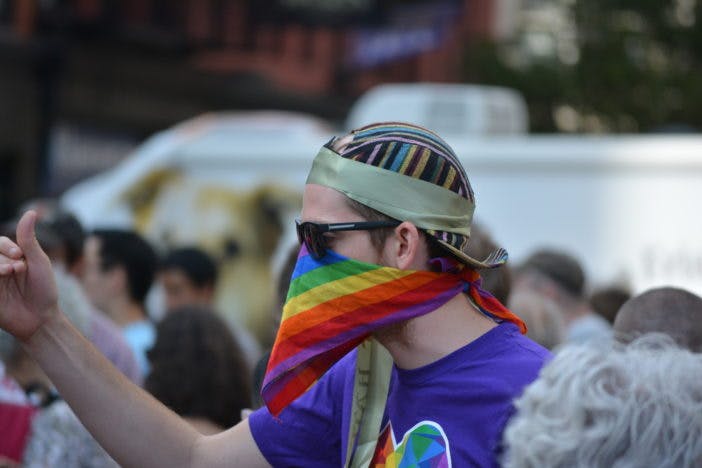 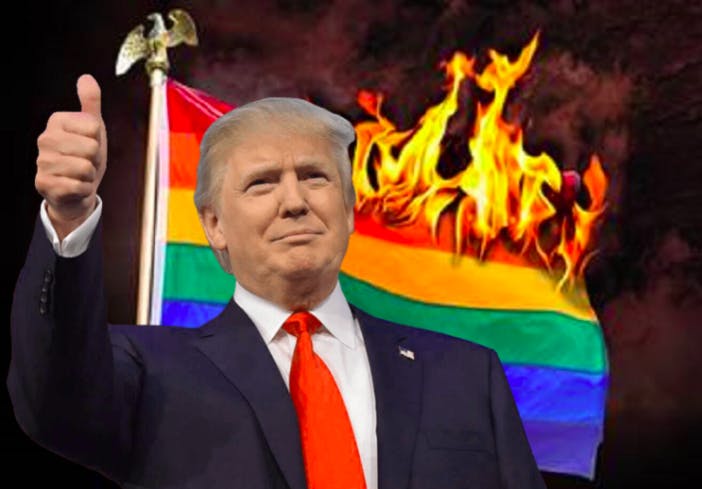 “If you’re not outraged, you’re not paying attention.” —Anonymous I add an important amendment to the above quote with the addition “…or you’re not capable…