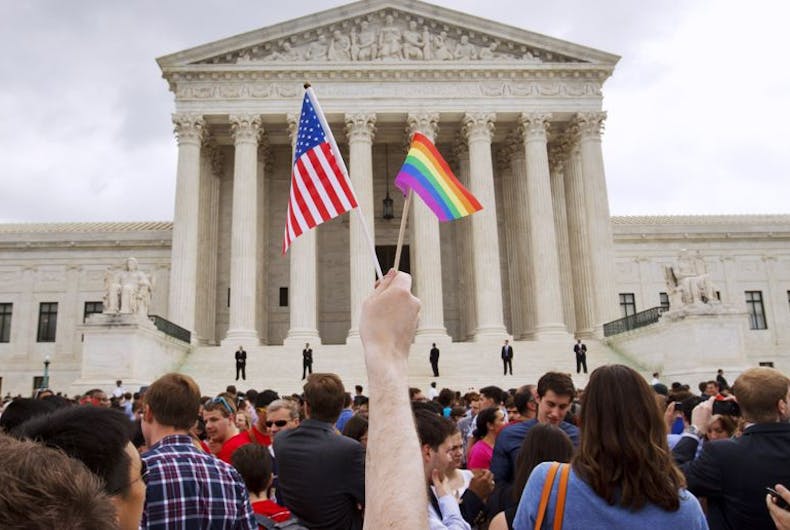 A man holds a U.S. and a rainbow flag outside the Supreme Court in Washington on June 26 after the court legalized same-sex marriage nationwide in 2015.Photo: Associated Press

The Masterpiece Cakeshop Supreme Court case could have a catastrophic impact on LGBTQ equality, but there’s another case pending with the Court that could have a disastrous effect on our community. Janus v. AFSCME is that case.

While it might seem like these two cases have little in common, the truth is both cases revolve around the same flawed legal argument: the idea that money is speech.

In Janus, the Court will decide if a non-union member can be forced to pay a union for the costs of negotiating their employment contract or if that violates the worker’s First Amendment rights.

Both of these cases rest on the dangerous precedent set by Citizens United v. FEC in 2010. That case allowed corporations to bankroll political campaigns under the argument that corporations are entitled to freedom of speech under the first amendment, and, crucially, that money is speech.

Let’s not mince words: with this case, the Supreme Court said the richer you are, the more speech you’re entitled to. Working people have less money, and they have less speech.

The impact of Janus on the LGBTQ community could be severe. In the majority of states, the only legal protection LGBTQ people have at the workplace is a union contract. There are thousands of LGBTQ teachers, custodians, officer workers, and more in state and local government who will be directly impacted if the union is weakened. Unions were the first institutions to offer workplace protections to LGBTQ people as well as the first to call for those protections to be put into law.

Unions are also a major funding source for progressive causes, including the Democratic Party. Every election, working people in unions spend hundreds of millions of dollars to elect politicians who support their issues, but they also pour thousands of hours of volunteer time into those political campaigns. Weakening unions weakens the progressive movement.

Public sector jobs – government workers, teachers, firefighters, etc. – have the highest union density in the country at about 35%, whereas only about 7% of private sector jobs are unionized. By going after the largest unions in bulk, the Koch brothers and their cronies can take a gigantic swipe at the progressive movement writ large while also putting a thumb on the government and working people alike.

The Civil Rights Act of 1964 prohibits discrimination in the public square: voting booths, schools, workplaces, and public accommodations. While enforcement of this historic act has never been perfect, it has been our strongest legal protection against those who hate us for the color of our skin, our gender identity, and who we love.

Masterpiece wants to reinterpret this act to allow individuals to be allowed to discriminate according to their religious beliefs, but underpinning this argument is the idea that accepting money is endorsing speech that the business owner may not like.

The Supreme Court opened a huge can of worms when it ruled that money is speech in Citizens United. Working people in unions and LGBTQ people are just the latest targets to be undermined by this terrible decision. If the Supreme Court is going to continue down this path, we must organize.

We must fight for our freedom and demand that the rules be rewritten to end Citizens United, to protect our ability to care for our families and retire with dignity, and to protect LGBTQ people from discrimination.

Jerame Davis is the Executive Director of Pride At Work, the nation’s only organization representing LGBTQ union members and their allies. The opinions expressed are his own and not the organization’s.