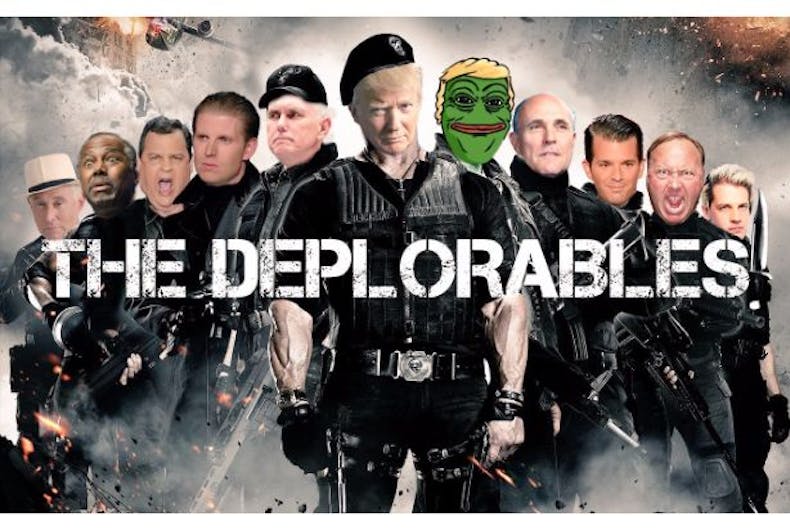 Former Trump advisor Roger Stone created this meme using Trump and his supporters (including the lizard who has become the symbol of the alt-right movement online)Photo: via Twitter

Those may be the three scariest words in the English language. Unfortunately, they are also reality for the next four years.

The pundits will spend countless hours trying to figure out just what combination of events led Trump to pull the most stunning political upset since Truman’s defeat of Dewey in 1948. Was it that Clinton was too damaged and establishment of a candidate? Was it that the polls seriously underestimated Trump’s appeal? Was it that white working class voters were making one last stand for dominance, motivated by hate? Was it the economy, improving but slowly?

In the end, it doesn’t much matter. What we will have over the next four years – or at least the next two – is a government completely in the hands of the Republican party. The Supreme Court? Antonin Scalia will look like Bernie Sanders compared to his replacement.

Obamacare? Hope you have good insurance through your employer.

Russia? Let’s have our pal Putin over for a slumber party in the Lincoln Room.

What does it all mean for us? As with so much else in Trumpland, it’s almost impossible to tell. Trump has sent so many mixed signals in a campaign characterized by chaos that what actually happens when he takes over the reins of government simply can’t be predicted.

On the one hand, Trump doesn’t really seem to hate us the way he genuinely hates many other groups, like immigrants, Muslims, and Latinos. In fact, Trump made a favorable remark about us at the Republican convention. At his rallies, his campaign distributed LGBTQs for Trump signs, an unimaginable turn of events from previous GOP presidential campaigns. These aren’t the marks of a man who bears us the deep-seated ill will of a hard-core homophobe.

On the other hand, he’s surrounded himself with a nasty cast of characters who have no such qualms. His campaign manager, Kellyanne Conway, was a pollster for the National Organization for Marriage. His political adviser, former House Speaker Newt Gingrich, can always be counted on to spout some homophobic nonsense. And then there’s Mike Pence, in a category by himself.

Moreover, none of the potentially moderating forces in the GOP ever fully backed Trump. That role fell to some of the worst figures in the religious right, who gladly stepped up to support Trump even after he was caught on tape admitting to sexual assault and accused of the same by more than a dozen credible women. They will be lining up at the Oval Office door on January 20, with the full expectation that their support will be repaid, and not just with a Supreme Court appointment.

So what happens? Probably a genuinely weird mixture of both nice words from Trump and vicious policies from his backers. Of course, that will pale in comparison to the sufferings of a lot of other people (and the economy). It’s going to be a really rough ride for the next four years.

Let’s just hope it’s not as rough as as a lot of us think it will be now.

Cancel reply
The next four years are going to be awful, but just how awful is anyone’s guess