Melania Trump promised during the presidential campaign that “if I am privileged enough to became your First Lady,” her work would focus on ending social media bullying. She asserted that the culture of social media has become “too mean and too tough” punctuated by abusive insults based on “looks and intelligence.”

Speaking in the White House Rose Garden this week, Ms. Trump announced well into her 15thmonth as First Lady that her agenda had expanded to encompass the overall well-being of youth, including young people being kind to one another, preventing all forms of bullying on social media and elsewhere, and staying off drugs.

“As a mother and as First Lady, it concerns me that in today’s fast-paced and ever-connected world, children can be less prepared to express or manage their emotions and often times turn to forms of destructive or addictive behavior such as bullying, drug addiction or even suicide,” she said in prepared remarks.

Tackling this ambitious agenda would be monumentally challenging for any individual or coalition of organizations, even at the highest levels.

For Melania Trump, married to the man who arguably supports the most restrictive and abusive policies toward young people ever to sit in the Oval Office, her work can be likened to a leaky kayak attempting to stay afloat as it becomes engulfed under the onslaught of a tsunami.

As an example, mere hours after Melania’s speech, the Trump Administration’s U.S. Attorney General Jeff Sessions declared at a law enforcement conference in Arizona that his office will tighten its actions on families who enter the U.S. without documentation by separating children from their parents and thus abandoning the current policy of keeping families together in detention facilities.

“If you are smuggling a child then we will prosecute you, and that child will be separated from you as required by law,” warned Sessions. “If you don’t like that, then don’t smuggle children over our border.”

In addition, by eliminating the Deferred Action for Childhood Arrivals (DACA) Program that President Obama issued as an executive order to protect the approximately 800,000 young people whose undocumented parents or guardians brought them into the United States, Donald Trump demonstrated that if he, indeed, has a heart beating inside his chest, it is composed of cold stone.

By taking this action, Trump has killed the dreams of the Dreamers by placing them under the authority of ICE (Immigration & Customs Enforcement). Though an alleged billionaire, Trump has revealed yet again his moral bankruptcy.

Trump’s deemphasis on education is reflected in his choice of highly controversial billionaire Betsy DeVos to head the U.S. Department of Education, who has in the past advocated for a voucher system that would divert funding from public schools to private and parochial schools, and give greater emphasis to for-profit charter schools.

Fairly recently, she has been charged with plagiarism. At her Senate confirmation hearings, she was roundly criticized for her lack of even basic knowledge on teaching and pedagogical issues that college sophomore education major would know.

Reports of President Trump’s upcoming budget shows a radical restructuring (decimation) of the Department of Education. With all the scandals and controversies swirling throughout the White House, important and potentially destructive policy initiatives are going virtually unnoticed through the efforts of our Diverter-In-Chief.

If Trump and his anti-public education co-conspirator Betsy DeVos get their way, $10.6 billion will be eliminated from federal education initiatives. The Trump administration wants to divert some of these funds, approximately $1.4 billion, to expand corporate for-profit charter schools and voucher schemes for private and religiously-based parochial schools.

Related: Melania Trump knows cyberbullying is a problem. She’s married to one.

In a memo sent from his Department of “Justice” to US attorneys, department heads, and federal agencies, Attorney General Sessions reversed an Obama-era policy that protected trans employees from discrimination under Title VII of the Civil Rights Act of 1964. Session made clear that his department would no longer interpret gender protections in Title VII to include gender identity and expression.

Since Trump’s inauguration, he abolished an Obama-era executive order permitting transgender students to use school facilities most closely aligning with their gender identities, and the White House website has removed reference to LGBT issues and policies from the previous administration.

The Department of Health and Human Services eliminated federal grants for organizations that do not support sexual abstinence-before-marriage only policies, even though the studies find these programs ineffective and potentially dangerous to the physical and emotional well-being of young people.

Trump continues to care little about the health of young people, or any living beings. What seems obvious to the scientific community seems like science fiction to many key politicians, including members of his administration.

He pulled the United States from the Paris Agreement on Climate Change, severely gutted regulations on corporations and industries that seriously pollute our water, air, and ground, while reemphasizing fossil fuels and deemphasizing clean energy sources.

As someone who possesses the authority to help resolve the scourge of gun violence in the U.S., he never once mentioned the root of the problem: guns, since he and his Republican co-conspirators are beholden to the National Rifle Association and its blood money.

He is pushing for a total repeal of the Affordable Care Act to be replaced by the Republican plan, which has already eliminated substantial numbers of middle and working class people being able to afford quality healthcare insurance, including thousands of youth, while simultaneously lowering taxes for the super-rich. The plan (scam) also reduces the number of people eligible for Medicaid, and potentially eliminates federal reimbursements to Planned Parenthood.

He has increased the risk of war by attempting to slash the budget for the Department of State by an estimated 30% while increasing the military budget by around $54 million.

Additionally, while U.S. national intelligence agencies have documented evidence that Iran has fully abided by its agreement with the U.S. and its allies to suspend Iran’s nuclear enrichment technologies for a specified period of time, Donald Trump violated the plan by withdrawing the United States. This action raises tensions throughout the Middle East, and imperils the entire world and its inhabitants, young and old.

So Melania, best wishes in your efforts to help young people, though about all you can hope for is to remain afloat against the cruel tides of your husband’s making. 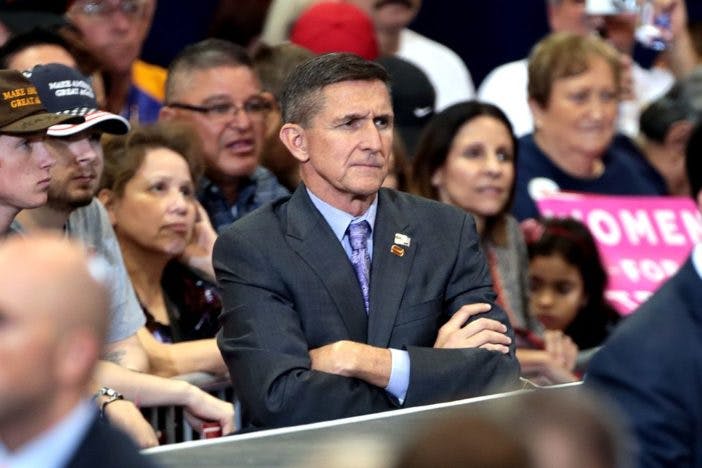 What does Donald Trump mean when he argues for “extreme vetting” of visitors and refugees to the United States? Trump’s executive order stops admittance of…