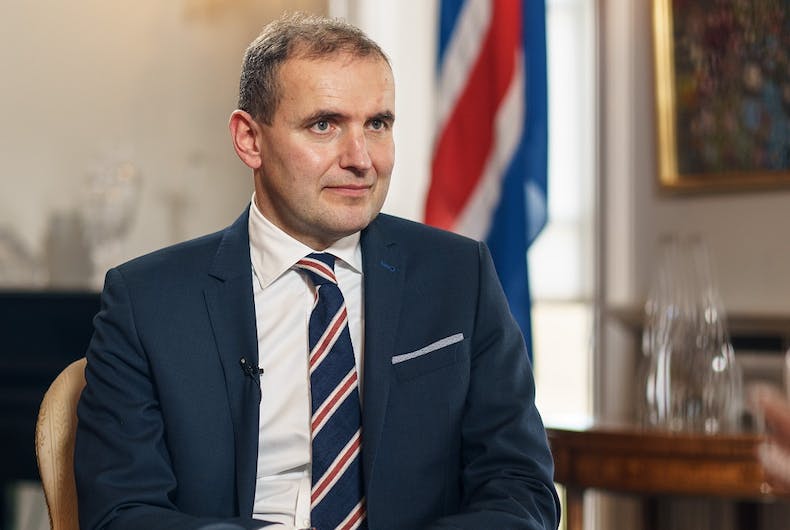 The president of Iceland greeted Mike Pence with a handshake… and a rainbow bracelet.

On the last leg of his European tour, Pence visited Iceland’s president Guðni Jóhannesson in Reykjavík.

Jóhannesson greeted Pence with a handshake, and astute observers noticed that he had a rainbow bracelet on his wrist.

As Mike Pence pulled up to Höfði House in Reykjavík, he was met not only by Iceland’s president, Guðni Jóhannesson, … https://t.co/sW04LD3Shn

This isn’t the first time Jóhannesson has worn a rainbow bracelet when meeting a homophobic foreign leader; he wore one when he met with Russian president Vladimir Putin.

And the president of Iceland, Gudni Th. Johannesson, donned his rainbow wrist band when meeting the vice president. Something he also wore when meeting Putin. pic.twitter.com/rCfD5Gf64v

Pence held meetings in the historic Höfði House in Reykjavík while in Iceland. As he was visiting, Advania – whose headquarters are across the street from the Höfði House – decided to replace their company flags with rainbow flags.

“We just felt the need to celebrate diversity today and wanted to show that by flying the flags,” said Ægir Már Þórisson, director of Advania. He did not say exactly why diversity had to be celebrated that way on the day that Pence was across the street.

Rainbow flags on display outside the Höfði House, where Vice President Mike Pence is holding meetings this afternoon in Iceland. It’s the site of the famous summit between Reagan and Gorbachev. pic.twitter.com/Vz5MehOObi

Pence has a long history of promoting anti-LGBTQ policy while in office, and this isn’t the first time a world leader has called him out on it.

Earlier this year, the prime minister of Ireland gave a small speech when he met Pence where he said that countries that love “freedom and liberty” don’t judge people based on their sexual orientation.