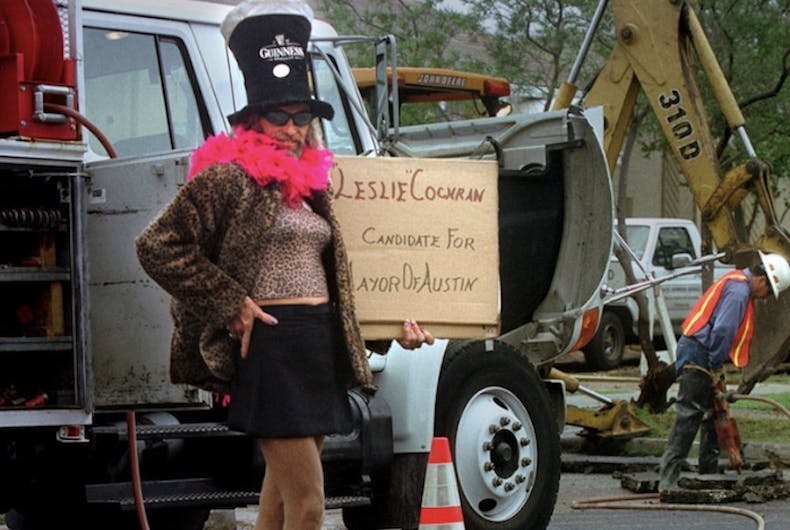 Maybe you’ve heard of Leslie Cochran, the man who dared to campaign for Mayor of Austin, Texas while walking down busy streets in an exposed thong.

Leslie Cochran was a homeless man who became an activist, celebrity and finally was deified in the pantheon of LGBTQ icons who challenged the status quo. Having been mentioned on both David Letterman and Jay Leno’s late-night talk shows, as well as being a word-of-mouth legend of the “weirdness” of Austin, Leslie was more than just a member of the city’s population: He was the walking embodiment of its countercultural consciousness.

This year at the SXSW 2019 Festivals and Conferences, Leslie’s legacy was immortalized in the debut of the documentary film Becoming Leslie directed by Tracy Frazier, almost seven years exactly after his death.

Though Leslie always considered himself a man, and never identified as trans or labeled his sexuality, there was a fluidity about him that resonated with LGBTQ people. At a time when our community was just barely starting to recover from the HIV epidemic, the idea of a man in drag protesting treatment of the homeless in the deep red streets of Texas was revolutionary.

The campaign to “Keep Austin Weird” was largely centered around this revolution—that Austin should have a place for even the most marginalized people, even those who didn’t fit into rigid gender norms. Leslie’s ferocious, unyielding visibility resulted in a nationwide reputation for Austin as a queer haven.

Leslie had planned to write a book about the treatment of the homeless population in the US while traveling across the country. In 1996, he found Austin and a cause worth fighting for.

In the late 1980s, the city had experienced a financial crisis which forced many into homelessness. By the time Leslie arrived, Austin had begun to spring back financially and was attempting to make its downtown area more attractive to business owners at the expense of the crisis’ victims.

Rather than instituting social programs, the city passed an anti-camping ordinance to criminalize its homeless population. Leslie stayed to fight this injustice. “If the police department hadn’t tried to run me out of town, I wouldn’t have stayed here and fought for freedom in the city,” Cochran says in the film with a laugh.

In a phone interview with LGBTQ Nation, Frazier says, “We had thought we would be done a lot sooner.” Local hairstylist Ruby C. Martin began filming Cochran in 2005 while interviewing him in exchange for cutting and styling his hair.

“Even though he didn’t pay her, it was more that they developed a friendship,” Frazier says, “so it became more about that than it was about payment in exchange for letting her film him.”

Frazier met Martin and joined the project to film Cochran in 2010, “But [plans for a full-fledged documentary] really got going in 2011,” Frazier says.

Unfortunately Leslie passed in 2012 and the project stalled. By the time that he had passed away they took a break. “[We had to figure] out what we wanted to do next.”

In 2014, they set up a Kickstarter to crowd fund the film’s editing and post-production. The project received $41,000 in donations from over 375 donors, but something was missing. Leslie’s story was coming together, but she felt it didn’t accurately portray who he was.

She was faced with the difficult task of creating a monument to a human who was bigger than himself. Leslie lived a hard life. Throughout his lifetime, he suffered sexual and physical abuse at the hands of both of his parents, married a woman and divorced her six months later, struggled with alcoholism, was arrested over 28 times by Austin police, suffered two traumatic head injuries and had briefly lived in Oak Creek, Colorado as a roadkill scavenger known as Trapper Al. Tracy didn’t want the film to seem like an exposé.

“I [didn’t] want people to think of sadness when they think of Leslie,” Frazier says. “I want them to think of resilience.”

Here’s the trailer for Becoming Leslie: