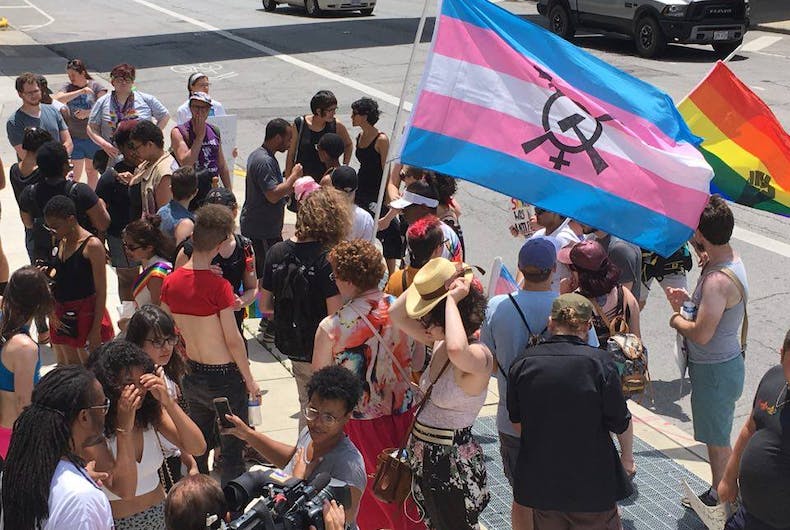 Three black trans individuals who were arrested for protesting Columbus Pride last year were sentenced on Monday. Wriply Bennet, Ashley Braxton, and Kendall Denton received no jail time, but were fined and sentenced to community service and probation.

Deandre Miles, who is also charged with aggravated robbery in a different case, is still awaiting sentencing. Together the individuals became known as Black Pride 4.

Last June, the group led a protest that blocked the Stonewall Columbus Pride Parade. They were pushed down, maced and arrested by Columbus police.

All of this raises the same question it did this summer. Should people protest Pride?

Pride started as a protest, long before the it became an event that attracted corporate sponsors and elected officials, and marches turned in to parades. Every year, we literally commemorate a riot that launched the modern LGBT rights movement.

Not a party. Not a festival. A riot.

Martin Luther King Jr. said, “A riot is the language of the unheard.” Stonewall was our LGBT ancestors making themselves heard – and bringing business as usual to a standstill in the process.

Too many of us are still unheard in our own communities. Sometimes we need to bring the festivities to a standstill until our voices are heard.

Sometimes justice requires inconveniencing people a little, to remind them of far worse that many of us deal with every day. In that sense, the protests at Pride capture the spirit of what started Pride in the first place.

If a parade or two have to pause for a few minutes or change routes, and the celebration is interrupted, it’s in the name of making our community a better, safer, more welcoming place for all of us.

Arresting, macing, and causing financial burdens to four underprivileged people who hurt no one isn’t justice – and it doesn’t make our community more welcoming. In fact, it’s worthy of protest. Police brutality and unjust laws spawned Pride; now it protects it.

Cancel reply
The trans folk who protested Pride have been sentenced, but was justice served?