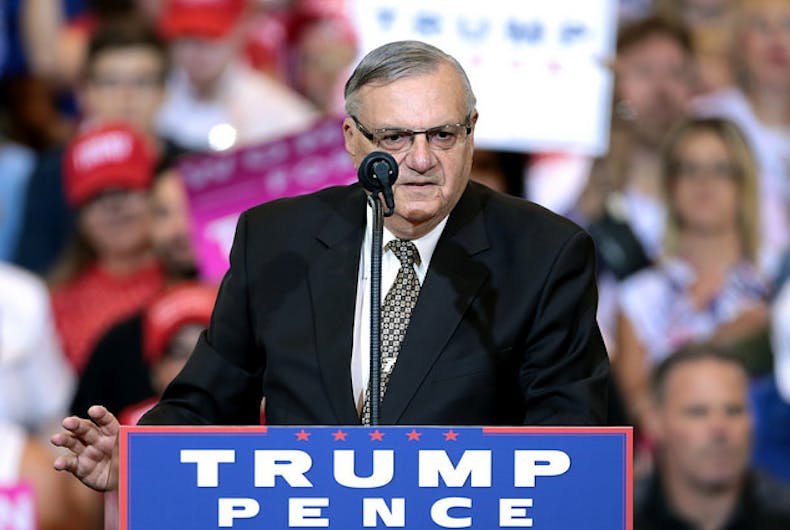 Joe Arpaio has benefited greatly from his friendship with Trump. Photo: Gage Skidmore, via Flickr

Say this for the Republican party: just when you think it can’t get any worse, another crop of candidates comes along to prove you wrong. The 2018 midterm elections is a case in point. We’ve reached the point where we can’t be surprised when Republicans nominate a neo-Nazi to run for Congress.

While there have always been wingnut candidates at the local level, this year is especially rich for Congressional candidates. Faced with a tough political landscape, a number of moderate (or what passes for moderate) Republican incumbents have decided to retire and a number of incumbent Democrats in otherwise red states look endangered. As a result, far-right believers see more opportunities, to replace or challenge Republicans and to take on Democrats.

The election cycle is only beginning, but there are plenty of examples from which to choose. Here are just three in what promises to be a wild year.

McDaniel is running for the Republican nomination for one of two Senate seats in Mississippi. The seat McDaniel is running for opened up when Thad Cochran retired due to illness. Cochran was a rock-ribbed (and anti-gay) conservative, but McDaniel challenged him four years ago on the grounds that Cochran wasn’t conservative enough and very nearly won.

McDaniel has complained that Democrats were “the party of sex on demand, the party that supports the homosexual agenda.” He also has flirted with the white supremacist movement, attending at least one neo-Confederate conference.

As the former head of one of the nation’s largest coal companies, Blankenship has deep pockets–and a questionable past. His main qualification for serving as the U.S. Senator from West Virginia seems to be that he served a year in jail for willfully violating federal safety laws in conjunction with an explosion that killed 29 miners.

Blankenship insists he was the victim of the Obama administration and has been running television ads to rehabilitate his image. In the past, Blankenship had bankrolled the anti-gay West Virginia Family Foundation, which insisted marriage equality would lead to schools being forced to provide “new gay recruits.”

Like Blankenship, Arpaio is also a convicted criminal, but with a presidential pardon. As the sheriff of Maricopa County in Arizona, Arpaio was known for his over-the-top tactics, including his enthusiastic support of racial profiling. (He also targeted political opponents.) Eventually, a federal court held him in contempt for refusing to stop illegal profiling, only to have President Trump pardon him as a “patriot.”

Now Arpaio is running for the Republican U.S. Senate nomination. He positions himself as a would-be Trump surrogate and certainly appeals to the same kind of fringe beliefs that motivate some Trump voters. Arpaio believed, like Trump, that President Obama’s birth certificate was a fraud, and he regularly talks to an anti-Semitic publication.