After the mass shooting at Pulse, an LGBTQ nightclub, that killed 49 and wounded another 53 in the early morning hours of June 12, 2016, the owners of Second Amendment Sports in Illinois, sold tickets for a raffle to benefit the victims and their families.

The prize was an AR-15 military-grade assault rifle – similar to the weapon of mass destruction used at the nightclub.

Organizers eventually cancelled it – not because of the outrage over the insensitivity of the event, but, rather, after they realized a raffle conducted by a for-profit company could be illegal in the state.

But Second Amendment Sports’ insane raffle is only one installment in the volatile and explosive gun culture of the United States.

On one side of the rifle, shop employees laser-etched the Knights Templar Long Cross of the original Crusaders when they marched to reclaim the Holy Land from Muslims in 1099 CE. On the other side, they engraved Psalm 144:1: “Blessed be the Lord my Rock, who trains my hands for war, my fingers for battle.”

“Mookie” Thomas originated the idea for the rifle, stating, “Off the cuff I said I’d like to have a gun that if a Muslim terrorist picked it up, a bolt of lightning would hit and knock him dead.”

Unfortunately, owners, employees, and customers at Spike’s Tactical seemed to have forgotten that the Christian Crusades represent one of the most horrific, shameful, and tragic scars on Christendom.

Pope Urban II summoned the First Crusade in Clermont, France to “liberate” Jerusalem from Muslims. When the Crusaders reached Jerusalem in 1099, they pillaged Muslim buildings and killed thousands. The massacre of the Muslim population of Jerusalem reached epic proportions.

In addition, the invaders burned the synagogue on the Temple Mount to the ground with all the Jews inside.

One Crusader, an eyewitness to the event wrote, “Men rode in blood up to their knees and bridle reins. It was a just and splendid judgment by God that this place would be filled with the blood of the unbelievers.”

Spike’s Tactical shop’s newest call for a Christian Crusade represents only the latest installment in the volatile and explosive gun culture of the United States.

In another installment in the booming and explosive gun culture, Bergeron’s Restaurant in Louisiana, billing itself as the home of “God, Gumbo, and Guns,” offers a 10% discount to any customer who brings a gun with them to lunch or dinner.

Says restaurant owner Kevin Cox, “Show it to me out of your purse, out of your back pocket….Show that you have one so if something goes wrong here today, I know you’re here to protect me.”

“You make a gun-free zone,” he argued, “that’s where bad people with guns are going to go – dumbest thing I’ve ever heard.”

Since instituting the discount this fall, business has increased approximately 25%.

Giving new meaning to the term “hunting for a wife,” Jewelry by Harold owner in North Liberty, Iowa last year gave a husband-to-be a voucher for a new Remington 870 rifle with the purchase of an engagement ring priced at $1,999 or higher.

To apply for this “deal,” one must be eligible to own a gun in Iowa, and not have been convicted of a felony.

In its attempt to pull in shoppers a couple of years ago on so-called “Black Friday” (the day following Thanksgiving), the camping and outdoors superstore, Cabela’s, handed out envelopes to the first 800 people over the age of 18 who lined up in front of its stores before 5:00 a.m. for a chance to win a Browning A-Bolt Medallion .300 WSM rifle with a Cabela’s 50th anniversary gun case worth $875.

And maybe it’s not too late to go down to Nations Truck Sales in Sanford, Florida where three years ago they offered each customer a brand spanking new assault rifle with the purchase of a truck.

Stated General Sales Manager, Nick Ginetta, “We started on Veterans Day. Hey, so many have given so much for this right!”

I’ve heard about people being shot from cannons, but for those who want to remain active hunters well after they have “bought the farm,” now their wishes have come true. Be the first on your block to kill long after you have died.

For the sum of only $1250, your loved ones can have you cremated with a pound of your ashes stuffed inside genuine bullets, resurrecting you as live ammunition.

For that measly sum, you can metamorphose as 250 shot shells, 100 rifles cartridges, or 250 pistol cartridges. For only $100 extra, until you come alive again as a killing apparatus, your bullet ashes can rest in peace in a decorative wooden coffin-like box.

Holy Smoke Bullet Urns’ cofounder, Clem Parnell, said, “You know I’ve thought about this for some time and I want to be cremated. Then I want my ashes put into some turkey load shotgun shells and have someone that knows how to turkey hunt use the shotgun shells with my ashes to shoot a turkey.”

“That way I will rest in peace knowing that the last thing that one turkey will see is me, screaming at him at about 900 feet per second.”

Wow, in this way, you will obtain virtual immortality in the elk antlers hung over your family’s fire place or in the stuffed duck sitting on their living room side table.

In addition to the decimation of wild game, the company offers this alternative to traditional burial as a means to “continue to protect your home and family even after you are gone.” So just think of it…

Now you can kill a home intruder by shooting them right in the gut with your Great Uncle Henry or Aunt Gert!

Just in time for the holiday season, the Scottsdale, Arizona gun club now offers its members the service of sending out their Christmas cards with family members, including infants, posing with Santa while holding pistols and military grade automatic weapons.

Of the mass murders in the United States since 1982, most of the shooters obtained their weapons legally. Demographically, the shooters in all but one case involved males usually white, with an average age of 35 years.

Certainly, Bergeron’s, Jewelry by Harold, Cabela’s, Holy Smoke Bullet Urns, Nation’s Truck Sales, and gun clubs hold the constitutional right to market their devices of death, but what type of messages are they communicating?

Are we really “free” as a society when our right “to keep and bear arms shall not be infringed”?

NRA Executive Vice President Wayne LaPierre likes to claim that “The only thing that stops a bad guy with a gun is a good guy with a gun.” But that leaves out the biggest question. Why do either of them have guns at all? 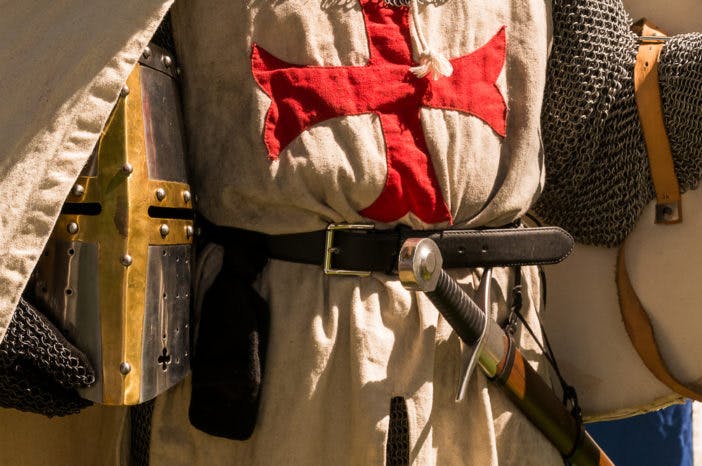 Pope Urban II summoned the First Christian Crusade in Clermont, France to “liberate” Jerusalem from Muslims. In the summer of 1096, as the Crusade began,…