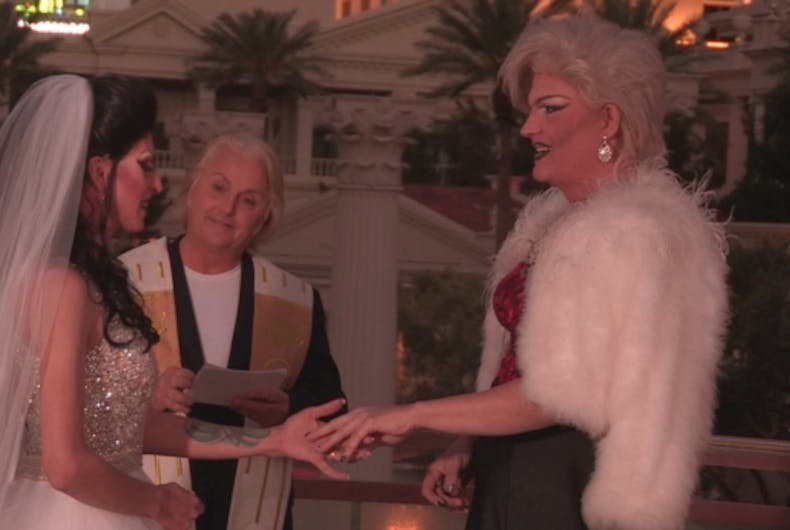 What happens in Vegas stays in Vegas. Well, unless you’re a couple of drag queens tying the knot at Caesar’s Palace. Then it’s just too epic to keep to away from the media eclipsing the occasion.

Two drag queens wanted to get married in Las Vegas in the biggest and baddest way – and they pulled it all off on camera.

Carl and Gary Cantwell-Finnegan took their drag personas (Patsy Stone and Chichi Monroe) to Caesar’s Palace, where they tied the knot wearing a dress by the same man who selected Princess Diana’s wedding gown -David Emanuel.

The whole thing was captured on TLC’s Say Yes to the Dress.

In an exclusive for PinkNews, Carl explained that “with LGBT+ rights being such a huge subject at the moment in the media, we thought it’d be a good idea to show the sector we work in and love: drag.”

Then Carl went one better.

“And if we were going to do it in drag, why not do it against the most spectacular background, and that was Las Vegas. It was unreal,” he said.

“We’d been obsessed with David ever since he did Diana’s dress, since I was a kid,” Gary said. “To be able to talk to him normally, like any person would, getting to know him, was amazing. He was so lovely.”

Emanuel had roughly 24 hours in order to select the dresses that would ultimately be shown on the popular television show.

“I’m larger and taller than Gary – 6’2″ in heels – so I knew David would have his work cut out with me,” Carl said. “I thought he would never find a dress for me, never in a million years. How he managed to find a dress which both fit me and that I fell in love with was amazing, especially in a shop I’d never been in before.”

It was the first time the couple visited the U.S. so they had no clue of their sizing.

“It was actually my first time in the States, so I had no idea what size I’d be, so I was completely gobsmacked,” Carl said. “The second I put it on, it fit perfectly.”

Carl told PinkNews that when he finally opened his eyes and saw Gary, “I had a nervous breakdown. I did not expect the reaction I had. It was all the excitement and nerves which had built up throughout the day, hitting me all at once.”

But it was never about the dress, Dorothy.

“To be honest, I didn’t even see the dress,” Carl said. “I looked straight past the dress, the make-up and the wig – I just saw Gary in front of me, rather than Chichi…It hit me like a ton of bricks.”

“It was so surreal,” Gary said. “Walking down towards David was so scary, but amazing, and seeing all the people looking down from the windows and taking pictures – it was just unbelievable. It was crazy.”