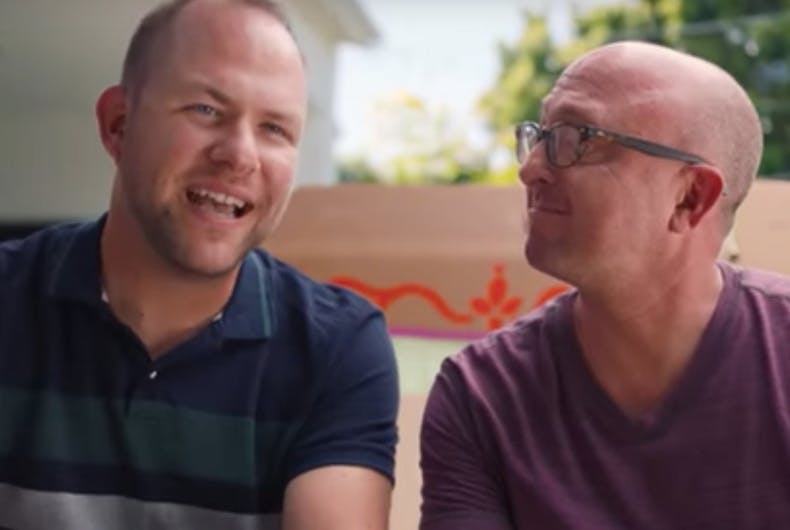 Enfamil, a company that makes infant formula, just featured a same-sex couple named Michael and Tony in their latest ad, showing a continuing trend of acknowledging the existence of same-sex couples in advertising.

The new ad (below), introduces their daughter, Zanna Lu, as the parents play in a puppet theatre with her. Later on, they throw a ball with her and hug her affectionately.

One parent says, “This is the most important person in the world because she made us dads. She gave us that title, gave us that love that we were looking for.”

His husband chimes in, “She’s our humor. She’s our heart. She’s everything.”

Related: Conservatives are outraged a gay couple is on the cover of ‘Parents’ magazine

The commercial is part of the company’s “Most Important Person in the World” promotion, according to Joe My God:

The most important person in the world probably isn’t who you’re thinking of. It’s not the richest person on Earth. Or the head of the biggest media company. Or the most advanced scientist. Or even the President. Not yet, anyway.

No, the most important person in the world is taking a nap. Or maybe chewing on their fingers, full of wonder and curiosity as they start making sense of this strange new world in which they find them self- hopefully enough to rethink everything and help make it a better place.

We imagine the antigay hate group One Million Moms will likely protest the commercial because they always oppose anything that acknowledges our existence. But even their naysaying can’t ruin this commercial’s sweetness or the progress it represents in recognizing same-sex parents.

Several recent studies have shown that “children raised by gay and lesbian parents develop as well psychologically as those raised by straight parents.” More communities around the U.S. have begun welcoming same-sex parents as the 2015 legalization of marriage equality increased the likelihood of same-sex couples raising kids together.