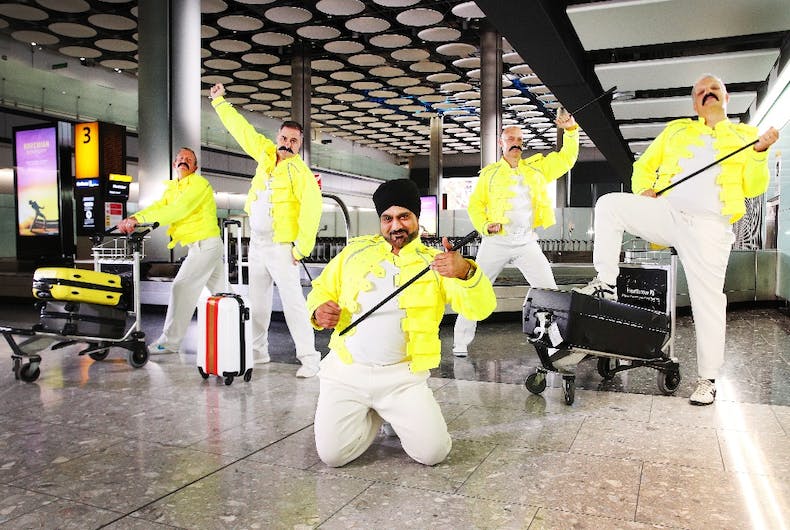 With the new biopic of Freddie Mercury’s life hitting theaters soon, what better time for British Airways and Heathrow International Airport to celebrate the bisexual singer’s impact? After all, before hitting it big, Mercury was a baggage handler for the airline.

The upcoming Queen biopic Bohemian Rhapsody will be released in the United States on November 2. It’ll hit screens in the UK on October 24.

The airport has some other special Freddie-related surprises for travelers too – including a display of memorabilia.

The iconic singer died of complications from AIDS in 1991. While he had denied that he had tested positive for HIV for years, less than 24 hours before he died, Mercury released a statement acknowledging his illness and calling on his fans to help fight AIDS.

“Following the enormous conjecture in the press over the last two weeks, I wish to confirm that I have been tested HIV positive and have AIDS. I felt it correct to keep this information private to date to protect the privacy of those around me. However, the time has come now for my friends and fans around the world to know the truth and I hope that everyone will join with me, my doctors and all those worldwide in the fight against this terrible disease,” the statement read.

“My privacy has always been very special to me and I am famous for my lack of interviews. Please understand this policy will continue.”

Freddie for take-off! Watch our baggage handlers pay tribute to former Heathrow baggage handler Freddie Mercury, as we celebrate the Queen legend’s birthday ahead of the launch of “Bohemian Rhapsody”, the new Queen movie released on October 24th. pic.twitter.com/aiikvWW0UW