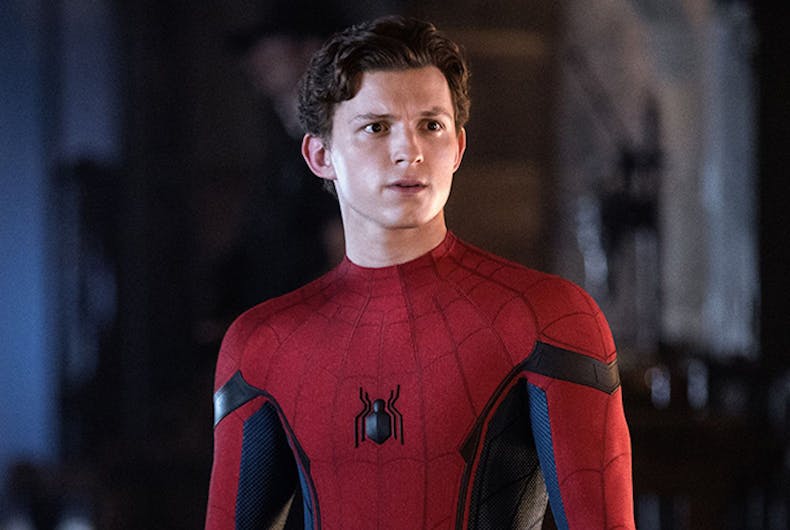 In a recent interview with The Sunday Times Tom Holland, the 23-year-old actor who has portrayed Spider-Man/Peter Parker in several Marvel superhero films, said that he would be okay if script writers had his character come out as gay in a subsequent film.

Holland said, “The world isn’t as simple as a straight white guy. It doesn’t end there, and these films need to represent more than one type of person.”

Marvel has slowly edged toward depicting out LGBTQ characters despite erasing a lesbian relationship from the 2018 film Black Panther and reneging on director James Gunn’s suggestion that Guardians of the Galaxy Vol. 2 might contain a gay/bi character. (It doesn’t.)

Since then, Marvel’s Netflix show Jessica Jones has had an immoral lesbian lawyer Jeri Hogarth, its third and final season features a trans character — Jones’ assistant Gillian, played by trans actress Aneesh Sheth — and the most recent film Spider-Man: Far From Home featured a trans actor, Zach Barack, playing one of Peter’s classmates.

Marvel is also seeking a gay actor for its 2020 film The Eternals. But you probably shouldn’t hold your breath for Spider-Man to come out.

In 2016, a leaked Sony memo specified that Spider-Man must be white and straight, just as his character was originally depicted in the 1960s comic books onward. Despite outrage from some fans, Spider-Man creator Stan Lee said he agreed with the memo.

Lee said, “I wouldn’t mind, if Peter Parker had originally been black, a Latino, an Indian or anything else, that he stay that way. But we originally made him white. I don’t see any reason to change that.”

He added, “I think the world has a place for gay superheroes, certainly. But again, I don’t see any reason to change the sexual proclivities of a character once they’ve already been established. I have no problem with creating new, homosexual superheroes.”

But perhaps there’s hope. After all, a mixed-race iteration of Spider-Man, Mile Morales, who has an African American father and a Puerto Rican mother, began appearing in Spider-Man comic books in 2011 and was even the star of the 2018 animated film Spider-Man: Into the Spider-Verse.

Cancel reply
Tom Holland would be okay playing a gay Spider-Man, but don’t hold your breath