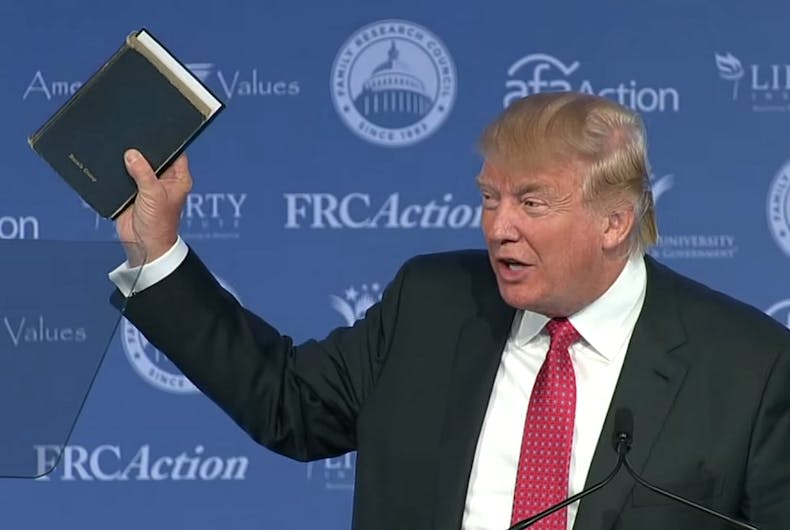 Trump, waving a Bible at a political event, even though he cannot name a single Bible passage that he likes.Photo: Screenshot/YouTube

Here’s a story from a couple days before the inauguration, when Donald Trump met with two Presbyterian ministers from New York City.

It was clear that Trump was still preoccupied with his November victory, and pleased with his performance with one constituency in particular.

“I did very, very well with evangelicals in the polls,” Trump interjected in the middle of the conversation — previously unreported comments that were described to me by both pastors.

They gently reminded Trump that neither of them was an evangelical.

“Well, what are you then?” Trump asked.

They explained they were mainline Protestants, the same Christian tradition in which Trump, a self-described Presbyterian, was raised and claims membership. Like many mainline pastors, they told the President-elect, they lead diverse congregations.

Trump nodded along, then posed another question to the two men: “But you’re all Christians?”

This is what annoys me so much about people who think that evangelicals’ homophobia and sexism come directly from Christianity – it’s pretty obvious that they don’t care at all about theology and are just looking for a nice way to spin the noxious beliefs that are independent of their religion.

The right, of course, loves to say that homophobes and misogynists are just really devout Christians. “Religious freedom” exemptions from the law sounds a lot better than “terrible human beings who want to hurt others” exemptions, although the latter is more accurate for most of them.

And we shouldn’t go along with it. Evangelicals tend to come from a different cultural background than mainline Christians or non-Christians, and that’s why they share political beliefs. Getting people to understand that these beliefs are political in nature and not religious bypasses theological debates that, really, we’re never going to win.

Trump himself shares a lot of the political beliefs of evangelicals – that’s how he got their votes. But his politics aren’t informed by Christianity since he literally doesn’t even know what Christianity is.

…adding: One of those pastors who met with Trump is one of the nicest people who ever lived.

“It just clicked into place in my head, where I was like, ‘Oh, this is a new Christian,’” Johnston said. “He is a Christian who’s what I would call a young Christian. He is early on this journey. He has not spent a lot of time exploring the faith.”

Trump is 70-years-old. He was raised in the church and regularly attended Sunday school. He has had decades to explore his faith.

It’s not that he doesn’t understand, it’s that he just doesn’t care.

Cancel reply
Trump doesn’t even know what Christianity is