Donald Trump might be weaseling out of his promise of a White House invitation after the U.S. won the Women’s World Cup, after Fox News broadcast people celebrating the victory by chanting “Fuck Trump!”

Days ago, captain of the U.S. Women’s National Team Megan Rapinoe got into a war of words with Trump. She said in an interview that, if she’s invited to the White House, she definitely wouldn’t go.

“I’m not going to the f–king White House,” she responded.

“We’re not gonna be invited. I doubt it,” she added, explaining that Trump doesn’t usually invite teams if he doesn’t think they’ll come, and several of her teammates had backed her up.

Related: Megan Rapinoe kneels during anthem before US match vs. Thailand

Trump responded on Twitter by saying that he would invite the women’s soccer team, “win or lose,” after the tournament is over. Well, it looks like he doesn’t remember that promise. Imagine that.

Yesterday in France, the U.S. Women’s National Team won the final match against the Netherlands 2-0, securing America’s fourth victory in the tournament since it was started in 1991.

“We haven’t really thought about it. We’ll look at that,” Trump told VOA News journalist Steve Herman about inviting the team to the White House.

The Women’s National Team’s coach Jill Ellis was asked after their victory if she is going to the White House.

“I don’t know,” Ellis responded. “I haven’t been invited, so I can’t really say.”

When asked if she expects an invitation, she said: “Well, I wouldn’t bet on that.”

Trump doesn’t seem to be in the inviting mood, either. Yesterday, as part of its coverage of the Women’s World Cup, Fox News sent a correspondent to a bar in Lyon, France, where the crowd started chanting “F–k Trump.”

Trump, who’s usually a fan of the far-right 24-hour news channel, had some pointed criticism of Fox News the next morning on Twitter. He blasted them for hiring Democratic strategist Donna Brazile.

….their lowest rated show. Watch the @FoxNews weekend daytime anchors, who are terrible, go after her big time. That’s what they want – but it sure is not what the audience wants!

In a thread of tweets this morning, Trump attacked Fox News, calling them worse than CNN, a channel that has often drawn his ire as “fake news.” (It isn’t.)

Watching @FoxNews weekend anchors is worse than watching low ratings Fake News @CNN, or Lyin’ Brian Williams (remember when he totally fabricated a War Story trying to make himself into a hero, & got fired. A very dishonest journalist!) and the crew of degenerate……

…a “source” of information (ask the Times what they paid for the Boston Globe, & what they sold it for (lost 1.5 Billion Dollars), or their old headquarters building disaster, or their unfunded liability? @FoxNews is changing fast, but they forgot the people who got them there!

While he didn’t mention the people chanting “Fu–k Trump” directly in any of the tweets, one can’t help but wonder if the two are related.

Because if he is embarrassed by Fox’s flubs, he probably wouldn’t mention it in public anyway. 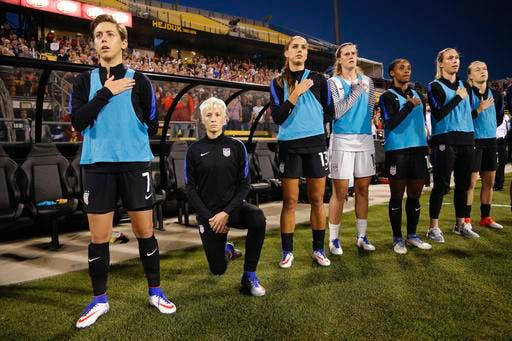 United States’ Megan Rapinoe, second from left, kneels during the playing of the national anthem before the soccer match against Thailand, Thursday, Sept. 15, 2016…