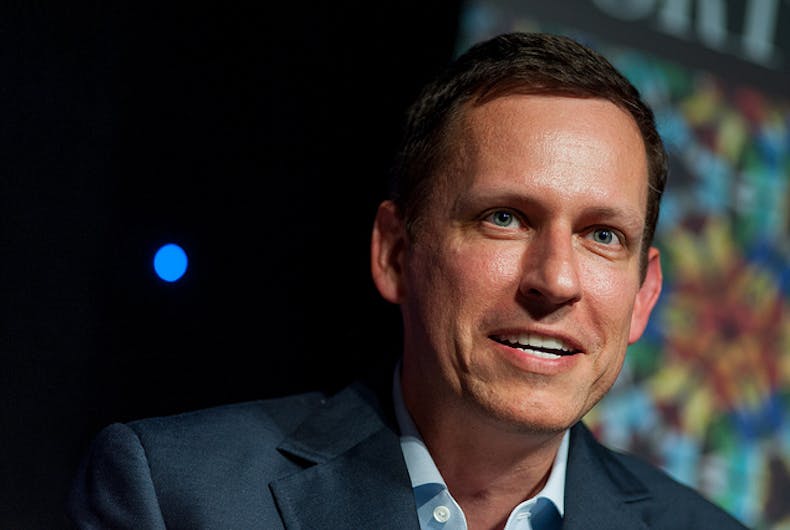 If you want to be a part of the soon-to-open LGBTQ social club and co-working space Yass, in San Francisco’s Mission District, you better come with the cash.

Yass is set to open in the spring, and is backed solely by venture capital firm Founders Fund, co-founded by Peter Thiel, the gay tech billionaire who donated $1.25 million to help elect Donald Trump, and was a member of his transition team.

It is being sold as “headquarters and hangout for a new generation of queer people.” (Read: Mostly white, cis men with money.)

Oh, and you will also have access to exclusive events, according to founder and CEO Brian Tran. So there’s that shoulder rubbing opportunity for those with disposable income.

The project has many San Franciscans upset, as tech cash and greed have already killed off many queer spaces and businesses in the city. Now, even LGBTQ community centers are coming wrapped in tech money, and with a price tag to get through the door.

Tran also seemed to wish to distance Yass from Thiel, claiming Thiel was not directly involved in the project. Instead, he said it was being funded by Cyan Banister, another partner at Thiel’s firm.

“The LGBT community in San Francisco, we need a space. But we don’t need a space that is tainted by the hate of Donald Trump,” David Campos, an openly gay former elected supervisor who represented the Mission, told The Guardian.

Campos, who has protested outside Thiel’s house over one of his companies producing software that helps the federal government deport immigrants, called on the neighborhood to reject the project.

“This is a president who has tried to disenfranchise members of the LGBT community, especially the transgender community,” he said. “When a gay man essentially becomes a tool of someone who is prosecuting people, that gay man needs to be called out.”

“Conservatives like Thiel are at the center of a movement that really doesn’t support queer communities. There’s some irony from trying to then profit from queer communities,” said Andrew Jolivette, a San Francisco state professor. He also criticized the name, as it comes from drag ball culture.

“This is Gay Inc 2.0 where now we’re not only sort of commercializing gay community and spaces, now we…take their expressions and their terminology,” he said.

“Queer people and people of color are constantly being pushed out,” drag queen Honey Mahogany added. “It seems like giving people who already have a leg up, more of a leg up.”

Dues will range from $50 to $300 monthly, with considerations of income determining what one pays, but with an average of $150 a month, Tran said.