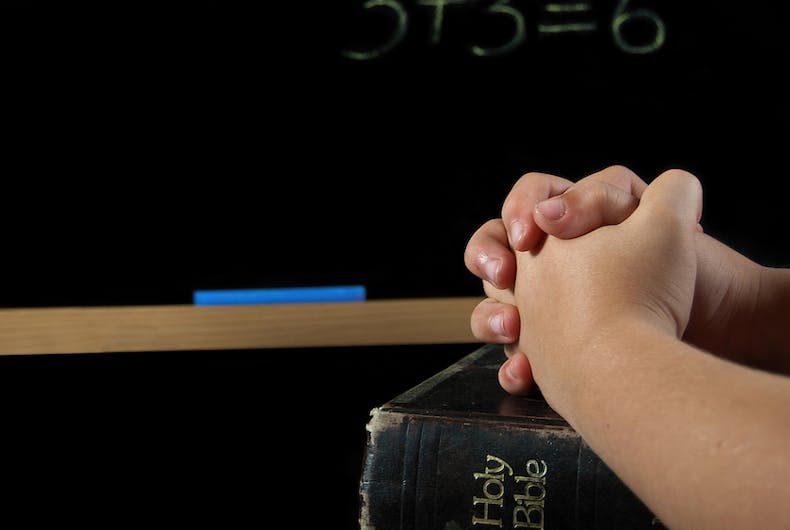 Schools have long been a key battleground for LGBTQ rights. The fight over bathrooms for transgender students has been one of the biggest battles (and a proxy for attacking trans rights in general), but it’s hardly the only one. The religious right has a strong ally in Education Secretary Betsy DeVos, who has been doing her best to rollback protections and give conservative evangelicals the 1950s school system they so want.

Then, there are the ongoing local skirmishes, like the parents in a Northern Virginia school system who want any LGBTQ-positive books removed from the shelves – but just when you think it can’t get any worse, it turns out it can. President Trump and the Supreme Court may be teaming up to erase the separation of church and state in schools.

Trump is proposing new federal guidelines to protect prayer in schools–or more specifically, conservative evangelicals praying in schools. At an event last week, flanked by DeVos and televangelist Paula White, Trump did his usual pandering to the religious right, whose votes he desperately needs to be re-elected.

“In public schools around the country, authorities are stopping students and teachers from praying, sharing their faith or following their religious beliefs. It is totally unacceptable,” Trump said at the event. “Tragically, there is a growing totalitarian impulse on the far left that seeks to punish, restrict and even prohibit religious expression.”

Needless to say, that’s a distortion of reality. Courts have made it clear that students are free to pray at school, as long as it’s voluntary, not led by school officials or teachers, and doesn’t impact class time.

Of course, some evangelicals would like nothing more than to ditch those restrictions. The new guidelines don’t go that far. They simply require that schools recertify that they are doing nothing to block students from praying on their own time and that states inform the federal government about any violations.

The symbolism of the new guidelines is the point. Not only does it send a signal to Trump’s core base that he’s catering to their wishes, but it sends a signal to schools around the nation that the federal government is watching them.

Just to reinforce that message, Trump also announced new guidelines that removes an Obama-era requirement with major implications for LGBTQ rights. Thanks to Trump, faith-based social service providers who get federal funding no longer have to alert clients that there is a religious component to the organization’s work and that there are secular alternatives. This lets hundreds of social service organizations, which get millions in federal funding each year, hide their biases.

As bad as all that is, the Supreme Court could be on the verge of making a major change for the worse. Montana had a program offering state tax credits to individuals and corporations who donated to private school scholarships. That included religious institutions, which led the Montana Supreme Court to strike the tax credits down as a violation of separation of church and state. The plaintiffs appealed, and the U.S. Supreme Court took up the case.

Should the justices rule to restore the tax credits, they are erasing a major line of church-state separation. The state would be indirectly funding private religious schools and getting one step closer to just outright funding.

Even the tax credits by themselves mean the state is funding anti-LGBTQ bias. A Huffington Post analysis of the 13 Montana schools that benefited from the tax credit, four of them have explicitly anti-LGBTQ policies.

All the activity around schools highlights an important change for the religious right. For years, they have been on the defensive. Under Trump, they are now on the offensive, trying to make as many gains as possible. That doesn’t stop conservative evangelicals as portraying themselves as helpless victims under constant siege. But in fact, they are in a position of unparalleled power right now. Just look at Trump. And perhaps, even more scary, just look at the Supreme Court.
Categories: Commentary
Tagged: Betsy DeVos, conservative evangelicals, Donald Trump, Education, religious right, separation of church and state, Supreme Court