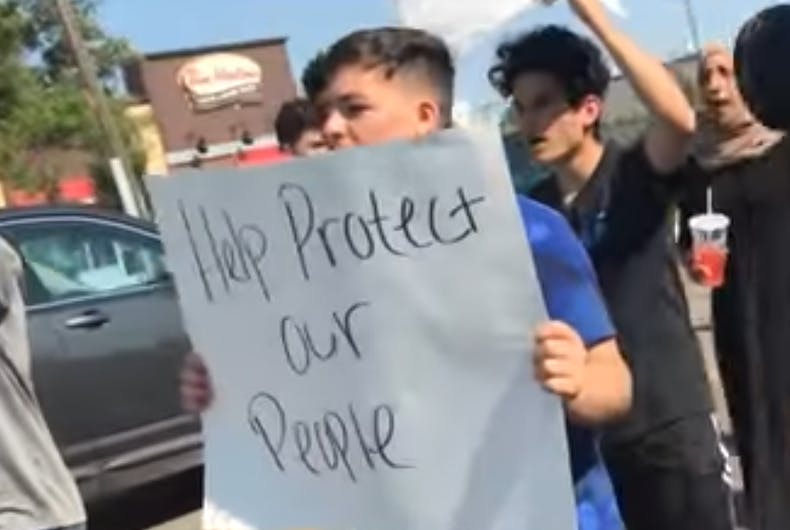 The deportation of Iraqi Christians led to protests this week.Photo: Screenshot/YouTube

Earlier today I posted a video of Tucker Carlson and Chadwick Moore in which they both pretended to be surprised that American LGBTQ people would be concerned with homophobia in the U.S. instead of homophobia in other countries.

As if people can’t be concerned with two things at once.

Especially since queer people are generally concerned with homophobia in other countries – if Carlson and Moore actually cared about this issue, they’d know that queer people have been protesting for an end to anti-gay violence in Chechnya for the last couple of months.

With that in mind, here’s a story from this week about the ICE arresting and moving to deport around 100 Christian Iraqis, many of whom are scared about the violence they’ll face as religious minorities in Iraq.

Some of the people arrested have been in the U.S. for decades. Many of them were regularly checking in with authorities as part of an agreement to let them stay in the U.S., but Politico reports that Trump’s executive orders restricting travel from certain Muslim-majority countries has led the ICE to deal with this “backlog” of cases.

A spokesperson for the Minority Humanitarian Foundation, a group that advocates for the victims of ISIS, said, “These are American citizens by all intents and purposes, They’re not Iraqis. If they are put back to Iraq they face death, simple as that. A lot of individuals don’t have families there anymore. They have no protection. Their homes are likely run over by ISIS.”

Many of the people arrested were Chaldean, a branch of Christianity that has existed in Iraq for centuries. Many fled the country when Saddam Hussein was in power, and emigration increased after the Iraq War began when Sunni extremists started targeting religious minorities. Violence against Iraqi Christians has continued to this day, both targeted violence against individuals and church bombings.

Now, the threat to Iraqi Christians comes from ISIL, and the U.S. last year officially denounced the violence as genocide.

About this week’s arrests, Mark Arabo of the Minority Humanitarian Foundation told CNN, “These are Christians that will be slaughtered as they arrive in Iraq. It’s inhuman, it’s unfathomable, it’s unbelievable and we will file a federal lawsuit asking for a stay.”

If there was a massive uproar from the right about these deportations, then I missed it.

Conservatives often accuse liberals of not caring about violence in other countries as a way to goad liberals into supporting their wars.

The thing is, war is a pretty terrible way to protect the rights of minorities in other countries. For example, look how well the Iraq War turned out for Christians in Iraq.

People who actually care about stopping oppression in other countries advocate for doing things that actually work, like diplomatic pressure, providing material aide, and taking in refugees from other countries.

People who don’t actually care about oppression in other countries advocate bombing.

Or to put it in terms that even Tucker Carlson can understand: if he really cared about the oppression of Christians then he would call on the Trump Administration to stop these deportations of Christians who face real violence instead of whining about how the government is oppressing Christian bakers who don’t want to follow the law.

Cancel reply
Trump to deport Christians back to ISIS territory, but the right is silent