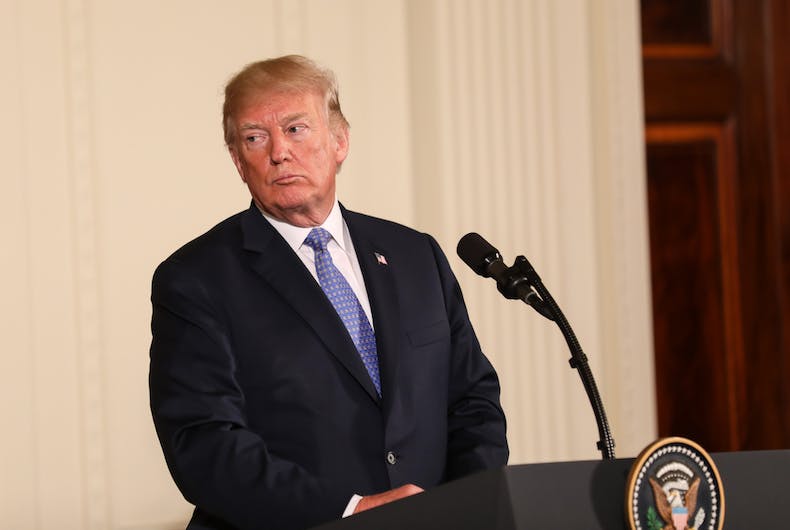 April 27, 2018: US President Donald Trump speaks at a press conference in the East Room of the White House alongside German Chancellor Angela Merkel.Photo: Shutterstock

Ever since he descended the gold escalator in Trump Tower, Donald Trump has painted a grim apocalyptic picture of America replete with marauding intercity gangs, crumbling towns, and invading hordes at the borders bent on gobbling up our jobs and raping our women.

He promised that “Only I can fix it.”

The Department of Defense informed Private Bonespurs that he cannot have his military parade, so, instead, he decided to parade the military on our southern border.

Even before many of the ballots were counted in the midterm elections, and a couple of hours before the White House announced the forced retirement of Attorney General Jeff Session, Trump held a rare official press conferences in front of the assembled media.

Though he was able to answer directly some of the reporters’ soft ball questions, he rarely if ever allowed people to complete their question before he interrupted to divert to a topic he wished to address, whether it had anything to do with the focus of the intended query or not. Otherwise, he lodged into unhinged insults and threats.

He accused anyone and everyone but himself for all problems. He blamed former President Obama for Russia’s march into and annexation of Crimea, and, therefore, seemed to justify his decision not confronting Putin on the illegal invasion.

Every day Trump tosses into the press pool a worthless nugget of sparkling fool’s gold as distracting lures to reporters hungry for scoops and meager scraps of breaking news. Often, these lures include attacks on the media itself.

At the press conference, Trump accused CNN’s Jim Acosta of being “a rude, terrible person” for pressing him on why he refers to asylum seekers hundreds of miles from the southern border as “an invasion.”

After NBC’s Peter Alexander defended Acosta, Trump told Alexander “I’m not a big fan of yours. Just sit down, please.” He also demanded that Urban Radio’s April Ryan sit down when she tried to direct a question.

Yamiche Alcindor, a White House correspondent for PBS NewsHour, stood up and asked whether Trump’s frequent embrace of the term “nationalist” was a nod to “white nationalism” as many of the President’s detractors claim.

Trump erupted by accusing Alcindor of insulting him.

“That’s such a racist question,” he charged. “What you just said is so insulting to me. It’s a very terrible thing that you said.”

Trump has constructed a false dichotomy with “nationalist” on one end and “globalist” on the other. He has been very deliberate when screaming into his bullhorn about his adoption of the term “nationalist” over “patriot.”

The former term traditionally refers to an extremist form of “white” national identity or jingoism.

Speaking at the historic Arc de Triomphe in Paris at a ceremony commemorating World War I in which Trump was in attendance, France’s President Macron directly cleared up any confusion between the terms, while warning of the deadly perils of the past.

“Nationalism is a betrayal of patriotism,” said Macron. “By saying ‘Our interests first, who cares about the others?’, we erase what a nation holds dearest, what gives it life, what makes it great and what is essential: its moral values.”

On the right-wing side of the political spectrum, we find the philosophy and practice of fascism. While also deployed as an epithet by some, fascism developed as a form of radical authoritarian nationalism in early-20th century Europe in response to liberalism and Marxism on the left.

Macron was very mindful of history in his remarks.

“I know there are old demons which are coming back to the surface. They are ready to wreak chaos and death,” he said. “History sometimes threatens to take its sinister course once again.”

Umberto Eco, who grew up under the fascist Mussolini regime, enumerates the characteristics of what he calls “Ur-Fascism,” or “Eternal Fascism” in 14 “typical” features.

He stressed that “These features cannot be organized into a system; many of them contradict each other, and are also typical of other kinds of despotism or fanaticism. But it is enough that one of them be present to allow fascism to coagulate around it.”

Trump fully embraces most of Eco’s tenets of fascism. For example, the cult of tradition (“Make America Great Again”), the rejection of modernism (globalism), disagreement is treason, fear of difference, obsession with a plot (“it’s a witch hunt,” “Democrat election fraud”), and machismo.

Once identifying as a Democrat, Trump has twisted himself into the mouthpiece of the far right of the Republican Party – essentially transforming it into the Trumpian Party.

By turning his back on former alliances, pulling out of prior treaty agreements, and collapsing into nationalist isolationism, this President encourages conditions that led to rise of fascism in a post-World War I world.

Cancel reply
Trump’s support for ‘nationalism’ is code for fascism. His actions prove it.