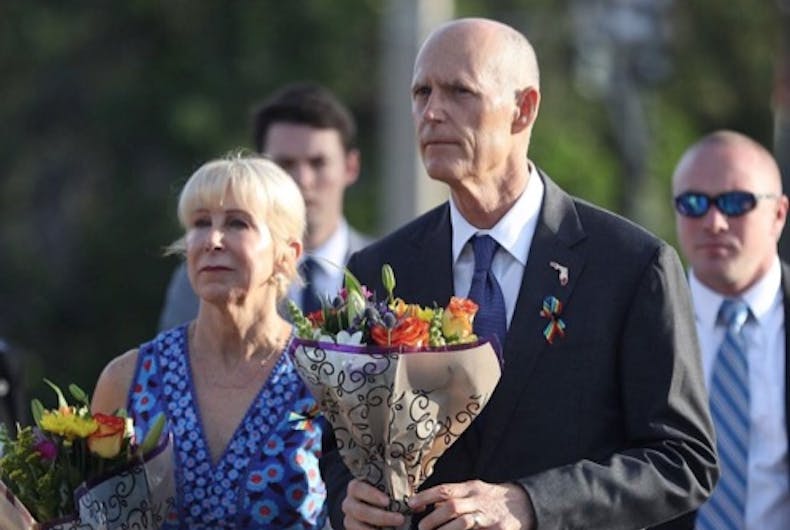 It took two years after the Pulse nightclub shooting — the second worst mass shooting in modern US — history for Florida governor Rick Scott to finally don a rainbow ribbon in support of LGBTQ victims of the Pulse shooting.

It’s with a VERY HAPPY heart that I post this photo. THANK YOU FOR FINALLY WEARING THE ORLANDO RIBBON AND ACKNOWLEDGING THE 49.
Thank You @FLGovScott

Scott, who is running for the US Senate, was spotted in April wearing a maroon ribbon in support of victims of the Parkland shooting but twice refused a Pulse ribbon when offered one.

Parkland survivor David Hogg called on Scott to wear the ribbon in support of Pulse victims.

While Scott’s rainbow ribbon could be taken as a sign of progress, Florida activists question Scott’s record on LGBTQ issues and ask why the governor hasn’t done more to reach out to the LGBTQ community since the shooting.

“You would think that in the aftermath of such a horrific attack that disproportionately impacted and targeted the LGBTQ community that there would be some increased awareness or sensitivity,” Rep. Smith said in a phone interview.

“We got nothing. I mean, he treats us like we don’t exist.”

Activists have noted a marked difference in Scott’s responses to the two shootings. After the Pulse shooting, Scott failed to push for any gun control legislation.

However, after the Parkland shooting, Scott signed measures that raised the legal minimum age required to purchase rifles and imposed a three-day waiting period on all gun sales.

Rep. Smith, who lost constituents and a friend in the shooting, noted the differences between the Parkland and Pulse victims.

“The majority of the Pulse victims, the 49 people who lost their lives at Pulse, they were mostly LGBTQ people of color. Didn’t their lives matter? Why wasn’t the debate about gun safety important enough then?” Smith asked.

For the second year in a row, Scott declared June 12 “Pulse Remembrance Day, ” and called for a statewide moment of silence to remember the victims, but failed to mention the LGBTQ community in his tweet commemorating the shooting.

Scott’s silence on LGBTQ rights speaks louder than his symbolic gestures. In the immediate aftermath of the shooting, Scott refused even to say the words “gay” and “LGBT” when speaking about the massacre.

Religious leaders have joined LGBTQ activists to urge Scott to sign an executive order to protect the rights of LGBTQ state employees. Christine Leinonen, whose son Christopher Leinonen and his boyfriend Juan Ramon Guerrero died in the shooting, urged Scott to do so in an op-ed column last year.

“This executive order would send a clear signal to Floridians, the nation and the world that hate and bigotry have no place in the Sunshine State,” Leinonen wrote.

But, despite promises from his staff, Scott has taken no action on LGBTQ equality.

Scott’s inaction reflects his record of not just failing to support but actively opposing LGBTQ equality. Scott fought to preserve Florida’s ban on same-sex marriage and campaigned against adoptions by gays and lesbians in 2010.

Scott finally acknowledged the LGBTQ community in a statement declaring the day of remembrance should be about the victims, not politics.

“The terrorist attack at Pulse nightclub was an evil act of terror against our gay community, our Hispanic community, our entire state and our entire nation. This day should not be about politics, but about respecting the victims and their loved ones,” Scott said.

“Ann and I join Floridians and Americans across the country in remembering this horrific attack and honoring the 49 innocent lives that were lost on this day two years ago.”

But politics most likely play a significant role in Scott’s weak attempt to have it both ways on LGBTQ issues after the pulse shooting. Scott has his eye on a seat in the Senate, and if he hopes to make the leap from state to national politics, he has to contend with a state divided on LGBTQ rights.

While areas like Key West are among the most gay-friendly places in the country, the Florida panhandle is much less so. “There are two Floridas,” and between them there’s a “patchwork,” said Nadine Smith, CEO of Equality Florida.

“When I drive from where I live in the Tampa Bay area to my hometown in the Panhandle, I have to weave my way through places that have full protections for me and my family and places where they’re absolutely indifferent to the discrimination my community faces,” Smith said.

Only 56% of Floridians live in communities that have enacted non-discrimination protections. The rest live in those communities Smith drives through – with no protections at all.

Scott has to campaign for votes in both, and perhaps he’s hoping that wearing a rainbow ribbon and issuing milquetoast statements while failing to take a clear stand on LGBTQ equality will suffice to get him the votes he needs. 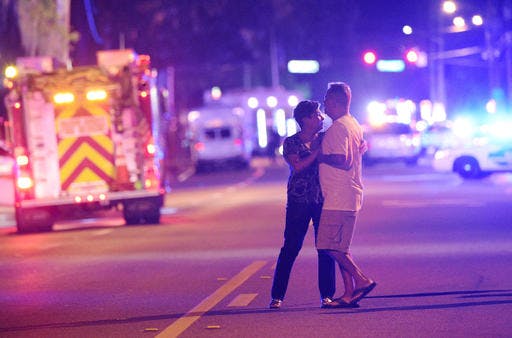 Family members wait for word from police after arriving down the street from a shooting involving multiple fatalities at Pulse Orlando nightclub in Orlando, Fla.,…

Cancel reply
Two years after the Pulse massacre, where is Rick Scott on LGBTQ rights?