HARTFORD, Conn. — Members of Connecticut’s NCAA champion women’s basketball team are taking a lead role in a national campaign in support of lesbian and bisexual athletes in women’s sports.

Four members of the team created a video for the Br{ache (pronounced Break) the Silence campaign to say gay athletes are welcome at UConn, and bullying people because of their sexual orientation is not tolerated.

Center Stefanie Dolson said she and her teammates feel strongly about the issue, and believe a message needed to be sent, that it’s OK for women to be who they are, and that everyone deserves respect.

“I think there is definitely a stigma or a stereotype in women’s basketball and other women’s sports, like softball and hockey, of women being gay just because they play a sport,” she said. “What we’re saying is that even if we are gay or bisexual, it shouldn’t matter, because we’re people.”

The campaign was created two years ago by former Division I college basketball players, Colleen McCaffrey and Nevin Caple, in an effort to bring attention to issues of discrimination involving sexual orientation in women’s sports.

Those issues were highlighted earlier this year when former Baylor center Brittney Griner said she was encouraged to keep her homosexuality secret while at the school.

Gay rights advocate Pat Griffin, a professor emerita at the University of Massachusetts, said there are college athletic programs that won’t recruit athletes they believe might be gay, and gay coaches and players who are fearful of being discriminated against if the come out.

“Heterosexual coaches will also promote the ‘family’ orientation of their own teams and the ‘lack of family values’ on rival teams as a way to negatively recruit without directly talk about lesbians,” she said.

Caple said the UConn team is the first to make a video for what they are calling their “Tour of Champions,” which will featur e a new team or player each month standing up for Lesbian, Gay, Bisexual and Transgender rights. The group recently finished a video with the University of North Carolina women’s lacrosse team, which will be launched this month.

“We hope Tour of Champions will build a pipeline of leadership, creating greater visibility of positive role models in women’s sports, which benefits all people at all levels of competition, not just the LGBTQ community,” Caple said.

The UConn men’s hockey team made a video last year for a similar campaign called You Can Play. The basketball video includes Dolson, forward Kaleena Mosqueda-Lewis, and guards Bria Hartley and Brianna Banks.

“All of us have friends or family members who are gay, and we want to show we support them,” Mosqueda-Lewis said. “I have no idea what goes on at other schools, but our coaches are about recruiting basketball players and recruiting good people.”

UConn women’s coach Geno Auriemma said he cons iders the sexual orientation of his players or potential recruits to be “intensely personal” and nothing that coaches should concern themselves with. He said he’s proud the athletes decided to speak out.

“I think it’s the responsibility of college kids to bring awareness to issues and be the agents of change,” Auriemma said. “I’m 59 and I know that if it wasn’t for those college kids in ’68, ’69, we might still be in Vietnam.” 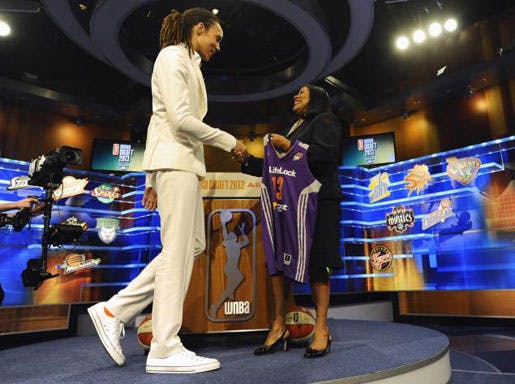