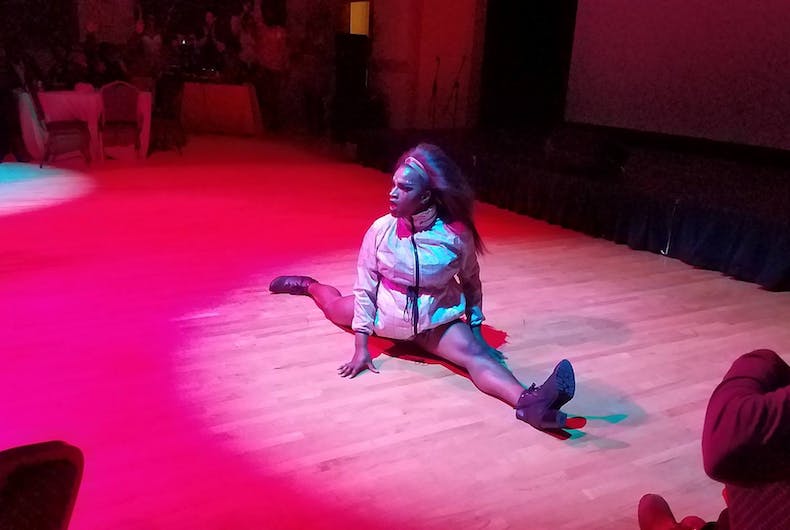 It’s been a few months since True Colors, the country’s longest-running LGBTQ youth theater company, was honored with the 2016 National Arts and Humanities Youth Program Award. But the energy created by that historic recognition hasn’t died down.

The night after Moonlight won Best Picture at the Oscars, a first for a black LGBTQ film, True Colors Out Youth Theater celebrated it’s own first with an extravaganza showcasing local artists and performers.

The National Arts and Humanities Youth Program Award is the highest award in the country for youth development programs, and receiving the award is a historic moment not only for True Colors, but also for the White House in recognizing and honoring the artistic talents of America’s LGBTQ youth, especially youth of color.

As one of the 12 awardees — chosen from a pool of more than 251 nominations and 50 finalists — True Colors is the first LGBTQ organization to receive the award.

Evelyn Francis, 40, director of programming at The Theater Offensive, the organization behind True Colors, and troupe member Traeshayona “Trae” Weekes, 18, accepted the award from First Lady Michelle Obama back in November. Weekes shared what it was like to travel to the White House to receive the award.

“I never left Boston until True Colors… Accepting this award from the First Lady of the United States at the White House was an unforgettable experience, and I’m so proud to be part of the first ever LGBTQ organization to receive this honor,” Weekes said. “It’s amazing to see that the power of True Colors’ work in helping make communities a safer space for LGBTQ youth while giving us a place to explore our identity and find our own culture in a way that is recognized and valued.”

True Colors celebrated receiving the award at the historic Hibernian Hall in Roxbury with performances by LGBTQ artists and performers like rapper Oompa, poet Black Venus, and the fabulous Fly Girls-Neon Calypso, Yune Neptune, and Candace, to name a few. Generations of True Colors participants proudly returned for the evening to celebrate not only the coveted honor, but also the man who made it all happen.

“This moment means the world to me because it’s the coming together of all the generations of True Colors Out Youth Theater. This is crazy! There are people who were in True Colors in the beginning who have children old enough to be in True Colors now,” Abe Rybeck, self-proclaimed “queer hillbilly” from West Virginia, ebulliently shared with me wearing his signature incandescent chandelier-like earrings.

True Colors Out Youth Theater is the creative genius of Abe Rybeck, 56, renowned executive artistic director of The Theater Offensive. The youth troupe has been in existence since 1994, and is the oldest out and allied youth theater in the world. The ages range from 14 to 22; 75 percent are youth of color and 40 percent are either gender-nonconforming or transgender coming from Greater Boston’s urban enclaves.

True Colors serves as a community sounding board and home base in forming and nurturing Greater Boston’s diverse LGBTQ youth artistic talent pool. The troupe receives theater training, leadership development, and performance opportunities across greater Boston and beyond. With that training the troupe challenges heterosexist cultural and familial norms by creating educational and social opportunities for cross-cultural dialogue within their communities by touring schools, churches, youth groups and social agencies.

For 23 years, True Colors has taught troupe members how to create art work from their authentic unapologetic lives. Learning that their lives are a work in progress as they grow and evolve, troupe members have shared that Rybeck has taught them how to put their stories in their bodies, and keep them there.

“Everybody has something inside, but don’t know it, but it’s in them,” Rybeck shared. “Giving True Colors a voice, we must support it for this to work, seeing what each person has, not correct it and judge it. It is a pleasure to have that be your work every day.”

Troupe members learning the art and discipline of putting pen to paper then orally telling and finally acting out their stories before an audience is impressive enough, but it is also awe-inspiring to watch these young actors proudly evolve and embody their unique narratives.

The work at True Colors builds confidence, and acceptance of self and others. The power derived from sharing their stories and publicly holding them up as models of activism empowers the troupe and informs communities struggling with LGBTQ-acceptance.

However, with this Trump presidency LGBTQ communities across the country are worried the country will become less accepting. Just last month, the Trump administration rolled back protections for transgender students revoking federal guidelines that schools allow transgender students to use the restrooms matching their gender. The week True Colors learned of their award, Trump use the Orlando gay nightclub shooting to broaden his ban on immigrants.

When I asked how will True Colors respond to a Trump presidency rolling back LGBTQ rights Rybeck laughed stating, “My young folks will not tolerate it!”

Cancel reply
Under Trump, we need LGBTQ youth programs like True Colors more than ever